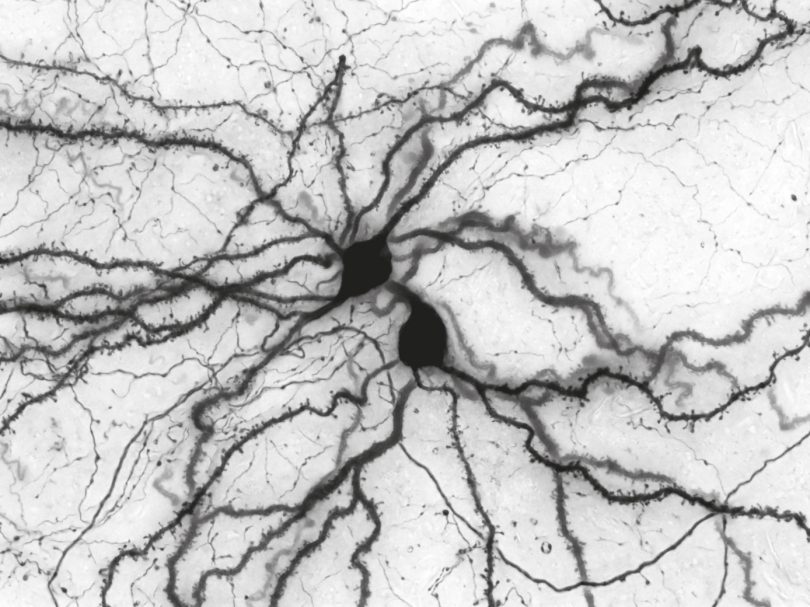 Two cortical pyramidal neurons in the cerebral cortex of a turtle, stained by injection of a dye through glass micropipettes. The round parts toward the center represent the cell bodies of the neurons and are about 20 micrometers in diameter. Staining by Mike Hemberger (Max Planck Institute for Brain Research).

New study provides unprecedented insights on the nature of neural processing in the cortex.

Brain computation is carried out by thousands to millions of neurons that interact with one another over space (within and between brain areas) and time (from milliseconds to minutes, typically). Brains are remarkably efficient: a typical human brain runs on less than 20W, a power comparable to that needed to drive a dim incandescent light bulb. The signals used by neurons, electrical pulses called action potentials or spikes, are relatively slow (lasting a millisecond). This means that brains run more than a million times more slowly than the clock of a typical CPU in a modern laptop.

How then, is it that brains are so good at what they do? A first reason is that they are very good at only few things: for example, our brains are highly specialized for recognition tasks (for faces for example), and poor performers at others (such as elaborate calculus). A second reason probably lies in clever modes of information processing by neuronal circuits, a subject of much experimental and theoretical research. Because neurons signal to each other via action potentials, information could reside in several features of pulse production, a process known as firing.

Information could be encoded in the duration or the amplitude of the action potentials; but those are typically constant, so it cannot be so. Alternatively, information could lie in the number of pulses produced per unit time, a feature called firing rate. Or it could be the timing of the pulses, in relation to a common reference or to the action potentials of other neurons. These two modes, respectively called rate and time codes, represent the extremes of a wide range of possible intermediate or hybrid processing schemes. Moreover, it could be that codes change over time and circumstances or that they differ across brain areas. Understanding how brain computation operates at this scale is therefore a key and complex domain of modern neuroscience.

In the early 90s, Moshe Abeles and colleagues in Israel (1) analyzed the structure of cortical circuits and from it elaborated theoretical proposals about cortical information flow. Abeles suggested that information could propagate by forming sequences of neuronal activation, which he named “synfire chains”. This hypothesis was examined and tested in computer simulations but experimental work has failed to provide strong supporting evidence. Until now.

A new study by Mike Hemberger and colleagues in the laboratory of Professor Gilles Laurent, Director at the Max Planck Institute for Brain Research in Frankfurt, Germany, provides novel important clues about these questions, using the simpler cerebral cortex of reptiles. In the new paper, published on August 19 in the journal Neuron, the scientists demonstrate that single action potentials produced by individual neurons in a cortical network can trigger reliable cascading activity across tens to hundreds of other neurons through this cortical area. The reliability of these triggered patterns came to the investigators as a great surprise. “Typically, individual neurons in cortex contact thousands of other neurons. It is thought that connections between neurons are typically weak. Thus, an individual neuron can only cause another one to fire when its output summates with those of many other neurons firing at the same time,” Hemberger explains. A corollary of this is that neuron-to-neuron communication is by necessity noisy (providing support for rate codes because they allow for averaging) and therefore unreliable, casting doubt on time codes.

Hemberger’s results do not match this general expectation. Rather, they show that a single neuron can reliably cause the activation of another, which itself can cause the activation of a third, and so on until this cascading activity fades away after about 1/5th of a second. In that interval, a chain of more than 30 neurons may have been activated. “This result has strong implications for the nature of neural processing in this cortex” says Laurent. “It implies that action potential timing in relation to that of other neurons can be precise, that single-neuron firing can be reliable, and that at least some of the synapses in cortex are strong enough to sustain activity triggered by single cells.” This result suggests that the very dense and complex connectivity of a cortical network hides in its midst some privileged pathways for information flow, probably defined by a network of rare but powerful connections. The next steps will be to examine whether these privileged information pathways are traced by learning, and if they occur equally in the mammalian cortex.

This study was supported by the Max Planck Society, the European Research Council under the EU’s 7th framework agreement, the Minerva Foundation and the Boehringer Ingelheim Fonds. Additional authors are Mark Shein-Idelson and Lorenz Pammer.