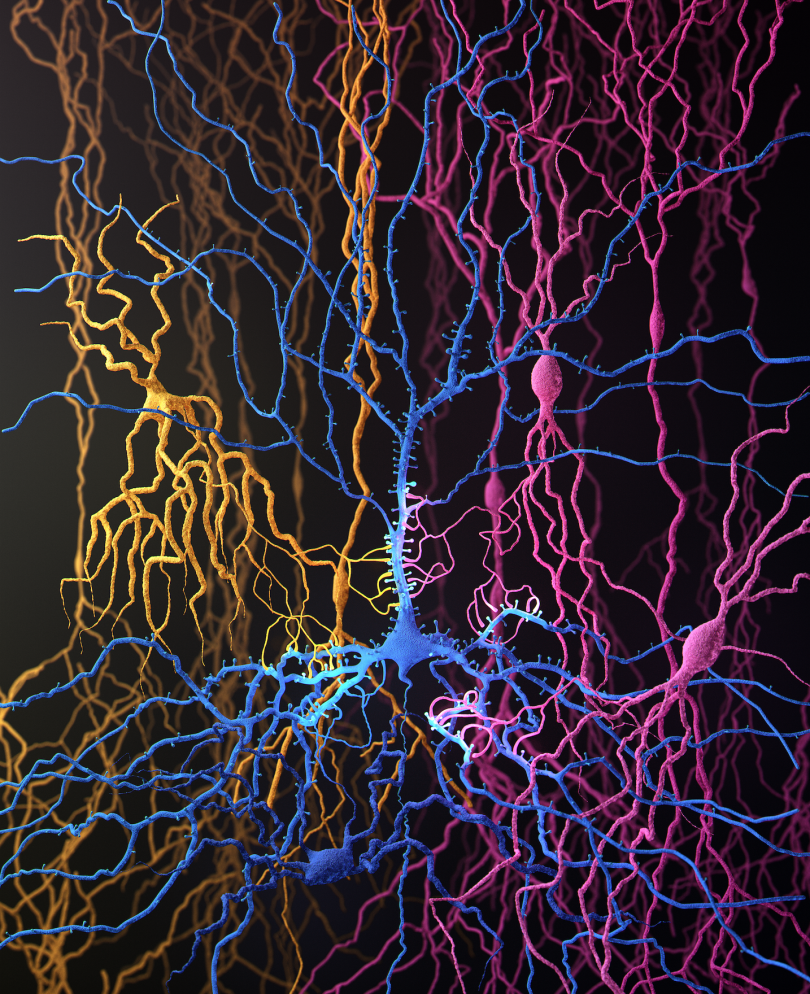 Researchers at the Max Planck Florida Institute for Neuroscience uncovered a diverse palette of inhibition within layer 2/3 of the visual cortex, suggestive of a more complex functional connectivity that may allow for enhanced flexibility of neuronal responses.

Neurons are complex, highly connected cells engaged with multiple networks throughout the brain, and they exhibit a wide range of activity. As such, individual neurons can perform many functions. Neurons are generally classified as either excitatory or inhibitory based on downstream effects on other cells, with each cell receiving a diverse array of excitatory and inhibitory synaptic inputs that help shape that cell’s unique properties. In a recent study, researchers at the Max Planck Florida Institute for Neuroscience (MPFI) revealed that inhibitory inputs to neurons in the visual cortex are more diverse than previously thought, suggesting that our current notion of neuronal connectivity may only reflect a part of the whole picture. The team of researchers explored how neurons are wired together and what effect these connections have on neuronal properties. Using genetic tools, imaging techniques, and optogenetics, they showed that inhibitory inputs onto single neurons can deviate from the canonical view of cortical circuits. The presence of this surprising, differentially-tuned inhibition suggests that cortical connectivity is more flexible than originally assumed, allowing for multiplexed computations.

Few studies have mapped inhibitory inputs onto neurons within intact brain circuits. Despite the wide variety of techniques to visualize excitatory connections, there are almost none readily available to study co-occurring inhibitory connections. Dr. Benjamin Scholl, Senior Research Scientist in the lab of Dr. David Fitzpatrick, and Dr. Daniel Wilson, now a postdoctoral researcher at Harvard Medical School, developed a strategy for labeling and mapping local inhibitory inputs onto a cell. They expressed a fluorescent protein specifically in inhibitory neurons, taking advantage of genetic markers to target only these cells, and combined whole-cell patch-clamp recordings with patterned stimulation of neurons to record their individual activity. In the same cells, they also measured their selectivity for different orientations of moving edges.

Scholl and colleagues found that the selectivity of inhibitory inputs may parallel or completely diverge from that of target neurons, revealing a “diverse palette” of inhibition. Previously, it was thought that these inputs should all be co-tuned, with aligned functional preferences. Data from this study suggests that, depending on network activation, inhibitory cells with different tuning profiles are able to uniquely contribute and allow for flexibility of network responses. “These networks are highly interconnected and dynamic, and these studies are beginning to show us that the functional connectivity we hope to uncover is more complicated than we previously believed,” remarks Scholl. Further, understanding the anatomical connectivity, or “connectome,” may not be entirely sufficient to understand brain circuits, emphasizing the need to map and elucidate functional connectomes in the brain.

The rules governing neuronal tuning are in no way simple, with different stimulus conditions evoking different patterns of excitation and inhibition, and there is much more about the intricacies of the visual system that has yet to be uncovered. But advancements in labeling and imaging techniques such as that outlined in Scholl’s paper open the door for future examination of synaptic inputs to individual neurons. “We have to appreciate the full complexity of how individual neurons are engaged in circuits,” states Fitzpatrick. “The power of this paper lies in the technology that allows us to record from individual neurons while presenting a visual stimulus and selectively activating inhibitory neurons.” Scholl and the Fitzpatrick lab hope to understand how excitation and inhibition are used flexibly to encode information, including during early development. Subsequent studies may explore the role of experience in shaping neuronal networks and the varying impact of individual neurons under different stimuli or contexts. The lab also hopes to develop new techniques for better resolution imaging and precise stimulation of single cells to further characterize the role of inhibitory neurons in the visual cortex.

This work was supported by the Max Planck Florida Institute for Neuroscience and National Institutes of Health Grant. The content of this article is solely the responsibility of the authors and does not necessarily represent the official views of the funding agencies.