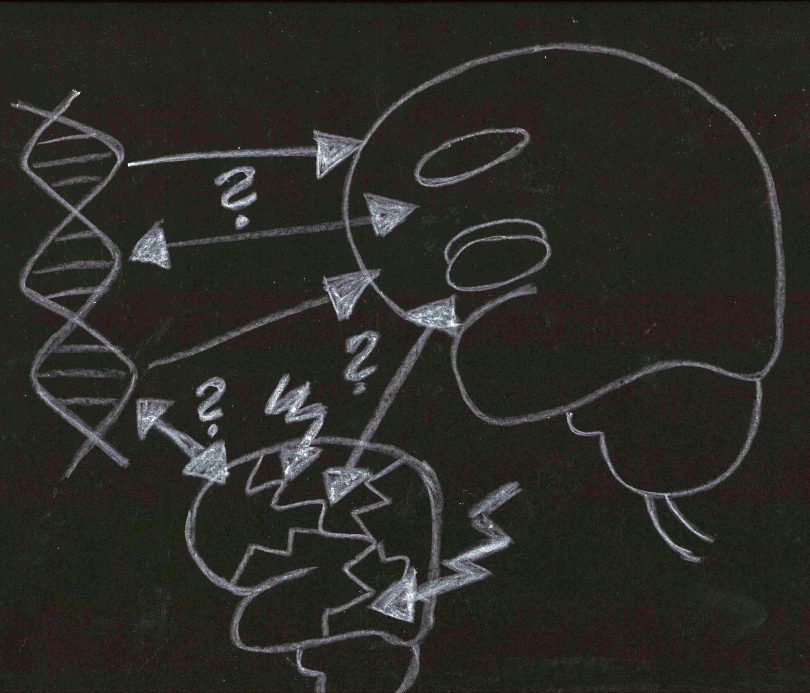 Interplay between cross-disorder risk gene and risk to develop symptoms of psychiatric disorders. © Till Andlauer | MPIP 2017

Single-nucleotide polymorphisms (SNPs) in CACNA1C, the α1C subunit of the voltage-gated L-type calcium channel Cav1.2, rank among the most consistent and replicable genetics findings in psychiatry and have been associated with schizophrenia, bipolar disorder and major depression. However, genetic variants of complex diseases often only confer a marginal increase in disease risk, which is additionally influenced by the environment. Here we show that embryonic deletion of Cacna1c in forebrain glutamatergic neurons promotes the manifestation of endophenotypes related to psychiatric disorders including cognitive decline, impaired synaptic plasticity, reduced sociability, hyperactivity and increased anxiety. Additional analyses revealed that depletion of Cacna1c during embryonic development also increases the susceptibility to chronic stress, which suggest that Cav1.2 interacts with the environment to shape disease vulnerability. Remarkably, this was not observed when Cacna1c was deleted in glutamatergic neurons during adulthood, where the later deletion even improved cognitive flexibility, strengthened synaptic plasticity and induced stress resilience. In a parallel gene × environment design in humans, we additionally demonstrate that SNPs in CACNA1C significantly interact with adverse life events to alter the risk to develop symptoms of psychiatric disorders.

Overall, our results further validate Cacna1c as a cross-disorder risk gene in mice and humans, and additionally suggest a differential role for Cav1.2 during development and adulthood in shaping cognition, sociability, emotional behavior and stress susceptibility. This may prompt the consideration for pharmacological manipulation of Cav1.2 in neuropsychiatric disorders with developmental and/or stress-related origins.