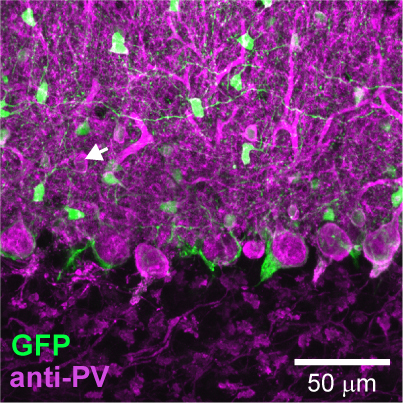 The cerebellum is an area of brain at the back of your head involved in movement. Its neuronal circuitry is relatively simple compared to other areas, but scientists still have a lot left to learn regarding its role in motor control and motor learning. The cerebellum is composed of several distinct types of neurons and isolating the function of each individual type of neuron within its circuit has remained a challenge.

Purkinje neurons are the only cells that send information outside of the cerebellum, but their output is influenced by several other types of neighboring cells, including local inhibitory interneurons located in the molecular layer. Researchers have been interested in these cells because they are known to prevent over excitation and are likely to be involved in motor disorders such as cerebellar ataxia. However, they are difficult to study in isolation.

There have been many attempts to understand the role of these inhibitory interneurons in cerebellar function. But as Matt Rowan, Ph.D., a Research Fellow who worked on the study mentioned, most methods have come up short in selectively targeting these interneurons. Samantha Amat, a lead author of the study, explained, “The solution was to find a gene uniquely expressed by interneurons of the molecular layer, but aren’t expressed in neighboring cells – and this is exactly what we developed.”

Jason Christie, Ph.D., Research Group Leader at MPFI and his team working in collaboration with the lab of Hiroki Taniguchi, also at MPFI, published their study in PLOS ONE in June 2017 describing their technique for selectively targeting and controlling the interneurons of the cerebellar molecular layer relying on a genetically engineered mouse model that exploits a unique gene encoding c-Kit to differentiate interneurons from other cell types.

“Our new method has transformed the research that we’re doing.” said Rowan, who is already working on more projects employing these mice. By understanding the role of interneurons in cerebellar function, the team hopes to identify new ways to treat debilitating conditions that affect movement. 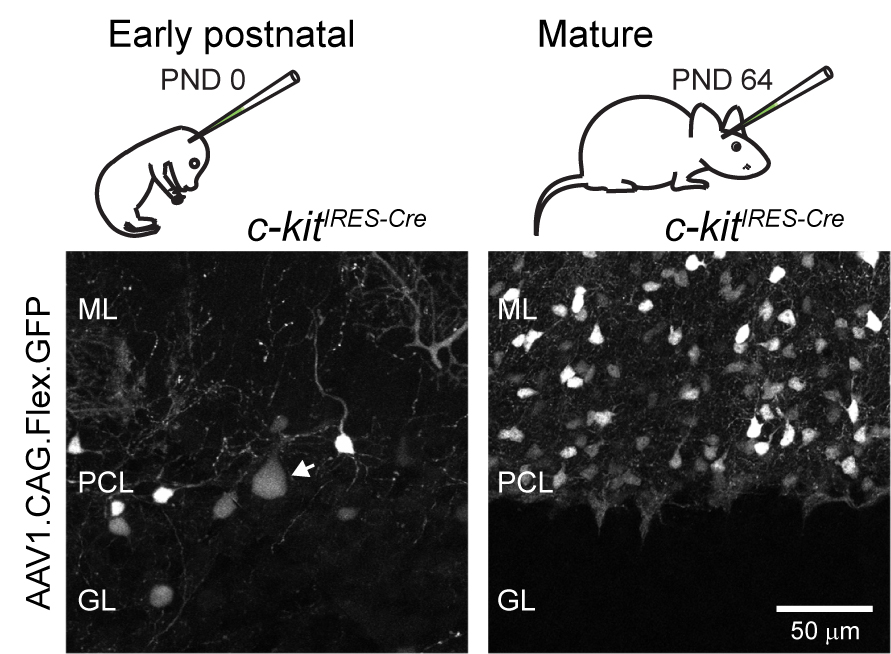 c-kit IRES-Cre mice allow for molecular layer interneurons targeting in mature mice.
The cerebella from c-kit IRES-Cre mice injected with Cre-reporter virus at PND (pups shortly after birth) 0 or PND 64. Tissue was prepared from animals 27 and 14 days after injection, respectively. Arrow points to a labeled PC in PND 0-injected cerebellum. Note the absence of Cre activity in PCs in mature animals. Scale bar in lower right applies to all images.

This work was supported by the National Institutes of Health Grants (NS083984 and NS083127), the Japan Science and Technology Agency (JSTPRESTO), the Max Planck Florida Institute for Neuroscience, and Max Planck Society. The content of this article is solely the responsibility of the authors and does not necessarily represent the official views of the funding agencies.