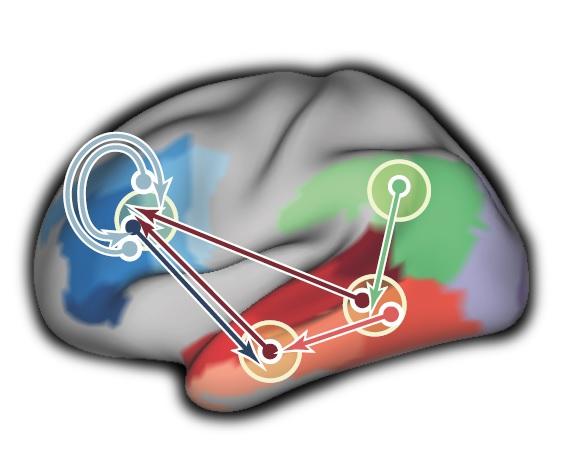 The arrows indicate the various directions of information flow between brain areas involved in processing language. Visual information about written words first arrives in the visual cortex, in the back of the brain (right, light purple and green). Subsequently, the temporal lobe is activated (mid-bottom, red/orange), which interprets the meaning of the words. Then, the frontal cortex (left, blue) activates and places the words in a broader context. For example in the context of the full sentence. Furthermore, the frontal cortex provides feedback to the previous areas, enabling prediction of (for example) the future course of the sentence. Copyright figure: PNAS

The communication between brain regions specialized in language is supported by rhythmic synchronisation of brain cells. Moreover, different rhythms reflect different directions of information flow – a breakthrough in the research on communication between functionally specialized brain regions. Neuroscientists from the Nijmegen Max Planck Institute for Psycholinguistics (MPI) and Radboud University publish their findings in PNAS on July 11.

Many neuroscientists study demarcated brain regions that are specialised in specific functions, like controlling movement or processing visual information. Jan-Mathijs Schoffelen, a neuroscientist at the MPI and Radboud University’s Donders Institute, is interested in the communication between brain regions. This information exchange is necessary for a smooth collaboration of specialized areas. Until now, little is known about these dynamic interactions and how they influence the efficiency of the brain. Simply because the interactions are hard to measure from the outside. Schoffelen: “MRI scanners allow us to see which brain areas are active when we perform certain tasks. We can also see, up to a certain level, how activation patterns between brain areas correlate. But how the interaction between them arises, and how information travels from A to B, is still a mystery.”

Brain regions exchange information through so-called action potentials: small discharges of electrical activity in brain cells. Previous research into the visual brain has already shown that rhythmic activity between brain regions generates a protocol that enables more efficient processing of action potentials. “In this study, we demonstrate the same protocol for the network of brain areas involved in processing language. This is a remarkable finding because language is a much more complex process than vision.”

Protocol for the whole brain?

Rhythmic brain activity facilitates information exchange between brain regions and makes communications more efficient. Furthermore, various rhythms reflect various directions of information flow (see above figure). “With our findings, we provide new evidence for the idea that this protocol could be a generic mechanism that also accounts for various other specialised brain regions,” according to Schoffelen. Thus, neuroscientists are a small step closer to solving the riddle of how brain regions communicate with each other.