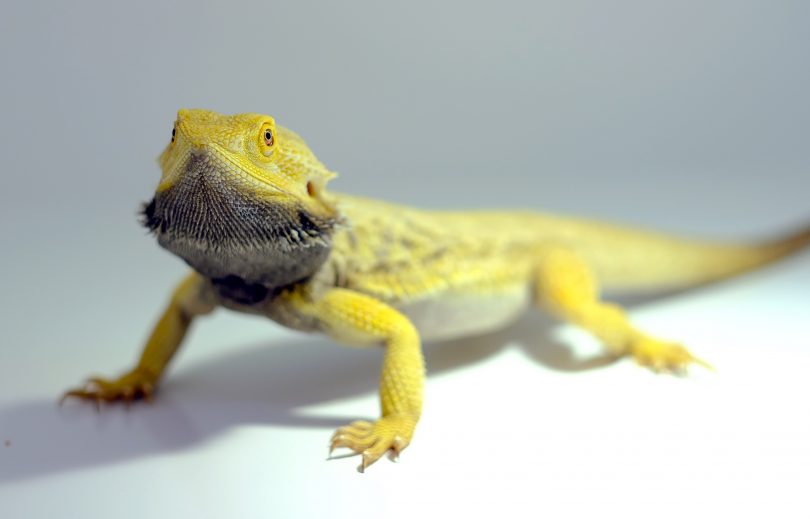 These days, dragons are keeping Game of Thrones fans on their toes. But they are also providing important insights into vertebrate brain evolution, as revealed by the work of Max Planck scientists on the brain of the Australian bearded dragon Pogona vitticeps. Vertebrate evolution took a major turn 320 million years ago when early tetrapods (animals with four limbs) transitioned from water to land, eventually giving rise to three major clades: the reptiles, the birds (an offshoot of the reptilian tree) and the mammals. Because of common ancestry, the brains of all tetrapods share a similar basal architecture established during early development. Yet, how variations on this common “Bauplan” contributed to clade-specific attributes remains unclear. Neuroscientists at the Max Planck Institute for Brain Research in Frankfurt tackled this question by generating a molecular atlas of the dragon brain and comparing it with one from mice. Their findings suggest that, contrary to popular belief that a mammalian brain consists of an ancient “reptilian” brain supplemented with new mammalian features, both reptilian and mammalian brains evolved their own clade-specific neuron types and circuits, from a common ancestral set.

“Neurons are the most diverse cell types in the body. Their evolutionary diversification reflects alterations in the developmental processes that produce them and may drive changes in the neural circuits they belong to”, says Prof. Gilles Laurent, Director at the Max Planck Institute for Brain Research who led the new study published in Science. “For example, distinct brain areas do not work in isolation, suggesting that the evolution of interconnected regions, such as the thalamus and cerebral cortex, might in some way be correlated. Also, a brain area in reptiles and mammals that derived from a common ancestral structure might have evolved in such a way that it remains ancestral in one clade today, while it is “modern” in the other. Conversely, it could be that both clades now contain a mix of common (ancient) and specific (novel) neuron types. These are the sorts of questions that our experiments tried to address”, Laurent adds.

While traditional approaches to compare developmental regions and projections in the brain do not have the necessary resolution to reveal these similarities and differences, Laurent and his team took a cellular transcriptomic approach. Using a technique called single-cell RNA sequencing that detects a large fraction of the RNA molecules (transcriptomes) present in single cells, the scientists generated a cell-type atlas of the brain of the Australian bearded dragon Pogona vitticeps and compared it to existing mouse brain datasets.

“We profiled over 280,000 cells from the brain of Pogona and identified 233 distinct types of neurons”, explains David Hain, graduate student in the Laurent Lab and co-first author of the study. “Computational integration of our data with mouse data revealed that these neurons can be grouped transcriptomically in common families, that probably represent ancestral neuron types”, says Hain. In addition, he found that that most areas of the brain contain a mix of common (ancient) and specific (novel) neuron types, as shown in the figure below.

Graduate student Tatiana Gallego-Flores used histological techniques to map these cell types throughout the dragon brain and observed (among other) that neurons in the thalamus could be grouped in two transcriptomic and anatomical domains, defined by their connectivity to other regions of the brain. Because these connected regions have had different fates in mammals and in reptiles, one of these regions being highly divergent, comparing the thalamic transcriptomes of these two domains proved to be very interesting. 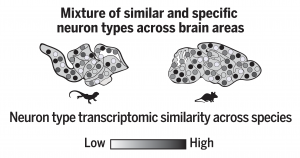 Indeed, it revealed that transcriptomic divergence matched that of the target regions. “This suggests that neuronal transcriptomic identity somewhat reflects, at least in part, the long-range connectivity of a region to its targets. Since we do not have the brains of ancient vertebrates, reconstructing the evolution of the brain over the past half billion years will require connecting together very complex molecular, developmental, anatomical and functional data in a way that is self-consistent. We live in very exciting times, because this is becoming possible” concludes Laurent.