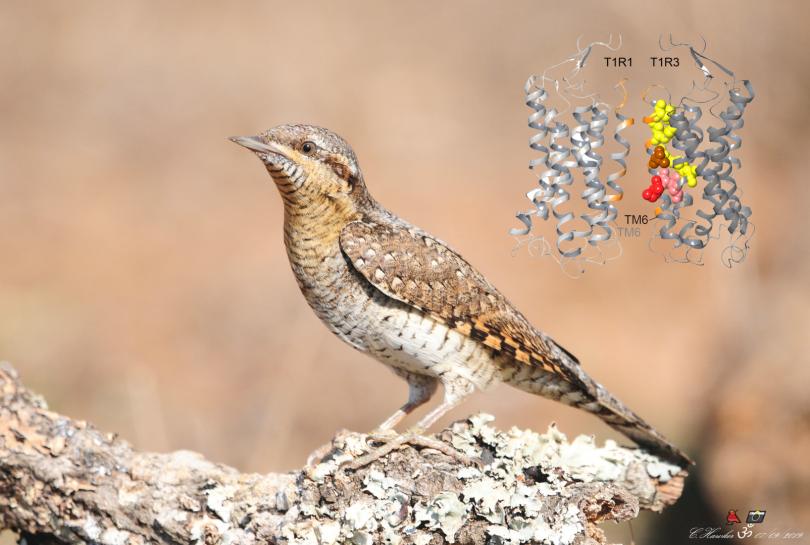 While woodpeckers modified their savory receptor to taste sweet, wrynecks reversed this gain through an unexpected molecular change in the receptor. © Carl Hawker (Macaulay Library ML176000781)

Woodpeckers taste sweet, but wrynecks—unusual woodpeckers that specialize on ants—lost the ability to taste sugars

Many mammals have a sweet tooth, but birds lost their sweet receptor during evolution. Although hummingbirds and songbirds independently repurposed their savory receptor to sense sugars, how other birds taste sweet is unclear. Now, an international team lead by researchers from the Max Planck Institute for Biological Intelligence (in foundation) shows that woodpeckers also regained sweet taste. Interestingly, wrynecks, specialized ant-eating woodpeckers, selectively reversed this gain through a simple and unexpected change in the receptor. These results demonstrate a novel mechanism of sensory reversion and highlight how sensory systems adapt to the dietary needs of different species.

Birds, the descendants of carnivorous dinosaurs, lack part of the sweet receptor found in mammals. This should leave them insensitive to sugars. However, recent studies have shown that both hummingbirds and songbirds have regained the ability to sense sugar by repurposing their savory receptor to now detect carbohydrates in fruits and nectar. How other birds sense sugars, and the extent to which taste receptor responses track the immense dietary diversity of birds, is unclear. To investigate this question, Julia Cramer and Maude Baldwin from the Research Group Evolution of Sensory Systems and colleagues from other universities* focused on woodpeckers. Although primarily insectivorous, this group of birds also contains multiple species that include sugar-rich sap, nectar, and fruits in their diets.

Using behavioral tests of wild birds, Baldwin’s group showed that woodpeckers clearly prefer sugar and amino-acids over water. Surprisingly, wrynecks – a member of the woodpecker group whose diet is almost exclusively composed of ants – displayed preferences for amino acids but not sugars. “Our next question was whether the observed sugar preference is mirrored by the birds’ receptors,” recaps Baldwin.

Functional analyses of taste receptors confirmed that woodpecker receptors were sensitive to sugars, whereas those of wrynecks were not. Interestingly, ancestral reconstructions indicated that the common ancestor of wrynecks and woodpeckers already possessed a modified savory receptor capable of responding to sugars. “This finding unveiled a third case of independent sugar-sensing evolution via modification of the savory receptor in birds”, says Cramer, the study’s first author. “Yet, what was even more exciting was the implication that wrynecks subsequently lost the receptor’s new function.”

Cramer’s meticulous dissection of differences between wryneck and woodpecker receptors revealed unexpectedly that changes in only a single amino acid in the wryneck receptor selectively turned off sugar-sensing: the birds kept their ability to taste savory, which is likely important for insect-specialist birds that consume a protein-rich diet.

These results trace an evolutionary history in which an early gain of sugar sensing in woodpeckers —possibly arising in an earlier ancestor and therefore older than woodpeckers themselves — was followed by its reversion when the wryneck receptor was later altered. “We were very surprised to find that this reversion is caused by changes in only one single amino acid, acting as a molecular switch to selectively regulate sugar sensitivity in wrynecks,” explains Cramer. “Unexpectedly, the result of this small change is that wrynecks are now again unable to detect sugar in their food but have retained the receptor’s ability to gather information on specific amino acid content. This makes a lot of sense when most of your diet is made up of ants.”

Further investigation will be required to describe how specific changes in taste receptors, and in other physiological and sensory systems, are related to the rich dietary diversity across birds.