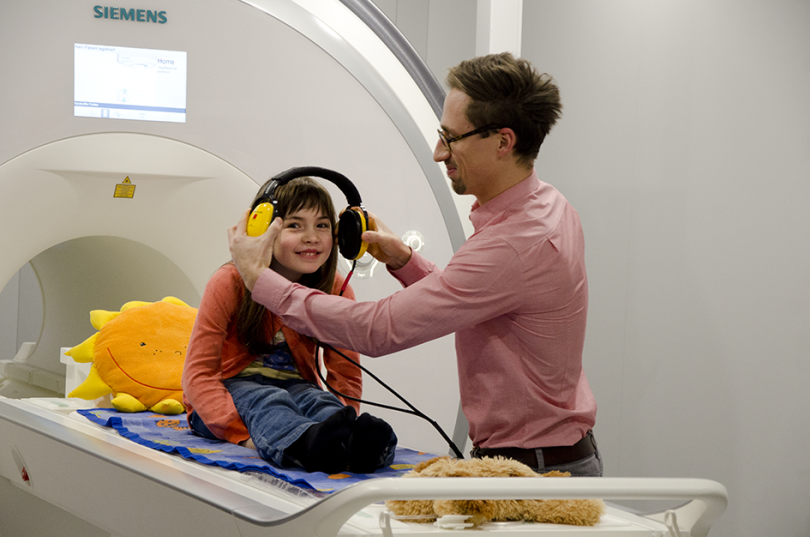 With the help of a model brain scanner, a young volunteer is preparing for the experiment. Michael Skeide, researcher at the Child Language Laboratory of the Max Planck Institute for Human Cognitive and Brain Sciences explains the test to the child to ensure that actual measurements go smoothly. © MPI CBS

Speech is generally believed to start with our very first cry at the moment we enter the world. In fact, however, it begins much earlier. We can already understand individual sounds in the womb. From then on, it would appear that speech develops paradoxically in the course of life: We reach many milestones at a blazing pace in the first three years of life, while other language skills do not develop fully until adulthood. For the first time, scientists at the Max Planck Institute for Human Cognitive and Brain Sciences in Leipzig have described the exact nature of this path in a comprehensive model. The model is based on an innovative method that sheds light on how a three-year-old’s brain processes speech.

It might appear paradoxical: On the one hand, even newborn babies are able to distinguish acoustically between individual syllables such as “ma” and “pa”, and three-year-olds can already understand simple sentences effortlessly. On the other hand, the ability to understand complicated formulations without difficulty, even if they consist of simple words, only develops in adulthood.

Brain researchers at the Max Planck Institute for Human Cognitive and Brain Sciences have found an explanation for this phenomenon: “The regions of the brain responsible for processing speech and the connection between them, a kind of data highway, mature at different rates,” as Angela D. Friederici, Director of the Leipzig-based Max Planck Institute, explains. Based on this finding, she and her team have proposed a comprehensive model of how individual speech-processing regions of the brain develop – from early childhood to full adulthood.

According to the model, a specific region of the cerebrum is involved in speech processing from the outset. Known as the left temporal lobe of the cerebrum, it enables us to differentiate “mama” from “papa” automatically in the space of just a few thousandths of a second. It can already process simple sentences consisting of a few words. Until around the age of three, the temporal lobe is therefore the epicentre of speech.

Only then is it gradually joined by a second central speech region, which forms part of the overall speech network, namely Broca’s area, which is located in the frontal region of the cerebrum. It is here that complex linguistic information is processed. This developmental step is clearly reflected in sentence comprehension. Even young children readily understand the German sentence “Der Fuchs jagt den Igel” (the fox hunts the hedgehog). Fox … hunts … hedgehog. Clear! Because German has cases that clearly indicate which animal is the hunter and which the prey, it is also possible to reverse the word order without changing the meaning of the sentence, i.e. “Den Igel jagt der Fuchs”. Young children are prone to misunderstand the sentence with the reversed word order, because – still unable to comprehend the meanings of the grammatical case markers – they interpret the simple word order “hedgehog … hunts … fox” incorrectly. Adults are able to process both sentences at the same speed and interpret them correctly.

With increasing age, Broca’s area is not only more strongly activated during speech processing, but also becomes more closely integrated in the overall speech network. This ability crucially depends on a bundle of nerve fibres known as the arcuate fasciculus, which forms a connection between these two speech centres, the left temporal lobe and Broca’s area. Only when this bundle of nerve fibres is mature are we able to process complicated sentences as quickly and efficiently as simple sentences. That does not happen until roughly towards the end of puberty. Just as the copper wire of an electricity cable is covered by a plastic sheath, in the course of development a thick myelin layer grows around every nerve fibre, allowing electrical signals to be transmitted at high speed with minimum loss. “We were able to show for the first time that the processing of difficult sentences improves depending on how well developed this fibre connection, the arcuate fascilicus, is,” says Michael Skeide who played a major role in devising the model.

The brain and its several areas that process language mature at a different pace from baby (“Neugeborene”, right) to adulthood (“Erwachsene”, left): The bundle of axons known as fasciculus arcuatus is not fully developed until we reach adulthood – when its short structure (yellow) is completed by a long part (blue). Only then can this nerve bundle can send information from the Broca area to the Wernicke area so that we can process complex grammatical sentences. LH = left side of the brain. © MPI CBS

“Our findings show all the more conclusively that speech entails far more than the processing of acoustic signals. Rather, it is the ability to combine words according to grammatical rules and to associate sentences with specific meanings,” Friederici explains. This ability is not fully established until adulthood. Only then are the necessary brain structures fully mature.

The findings were obtained thanks to an innovative method that was elaborated at the Max Planck Institute in Leipzig. “For a long time, our knowledge of how the brain develops the ability to process complex language was sketchy. It seemed impossible to look into the brains of young children while they are processing speech,” she explains. It was thought that the usual technique of magnetic resonance imaging (MRI) is unsuitable for young children – especially because they find it difficult to hold their head still during the procedure.

Friederici and her team succeeded in refining MRI measurements to the extent that it is now possible to peer into the brains of three-year-olds. The key idea behind their method was to combine business with pleasure. They practised keeping still with children as a game while the children watched an animated film. “This method paved the way for our current understanding of the development of our speech network,” she adds.

Original Publication:
Skeide, M. A. and Friederici, A. D.
The ontogeny of the cortical language network.
Nature Reviews Neuroscience