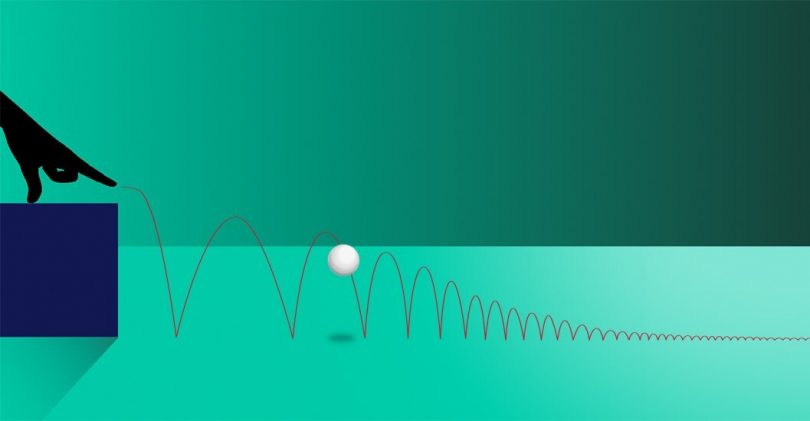 If you apply some force to a ping pong ball by pushing it off the table, it can transiently move in a certain frequency range and will dissipate its energy before it comes to a halt again. Analogously, we can think of a brain area as a damped harmonic oscillator driven by external, non-rhythmic inputs from the previous brain area. This kind of system does not oscillate by itself but amplifies the noisy inputs in a certain frequency range. © ESI/C. Kernberger

Gamma rhythms in the brain are neither self-sustaining nor regular. But many earlier models assumed just that. ESI scientists now show, that these rhythms can be explained by a much simpler mechanism.

Through the interaction between thousands to millions of neurons, the cerebral cortex (outer layer of the brain) generates dynamic patterns of activity at many levels: From the scalp to mesoscopic field potentials at the brain surface to the voltage potentials inside neurons. Just like the interaction between particles can cause certain rhythmic behaviors at a macroscopic pattern, like molecules in a gas, the interactions between millions of individual neurons can lead to network phenomena that show certain statistical regularities. One example is the rhythmic patterns of activity around 30-80Hz (gamma frequency) which can be observed in the visual cortex when animals and subjects see stimuli with high spatial regularity. A new paper from researchers at the Ernst Strüngmann Institute (ESI) for Neuroscience in Frankfurt, Germany, published in Nature Communications, sheds new light on how these rhythms emerge from basic interactions between inhibitory and excitatory neurons. ESI scientist Georgios Spyropoulos led the study.

Rhythms in nature can be very regular

The heartbeat, the circadian rhythm, and the earth’s rotation around its axis are just a few examples of rhythms in nature that can be very regular sometimes. In these cases, we can speak of self-sustained, autonomous oscillators, which can be synchronized by an external force. For example, think of the entrainment of our circadian rhythms by daylight or the heart by a cardiac pacemaker. Yet, gamma rhythms found in the brain show a lot of variability in the amplitude and duration of cycles. They also may have different characteristics and functional properties compared to these self-sustained, regular oscillators (like the heart). Nevertheless, almost all previous models of these gamma rhythms are based on models of self-sustained oscillators.

Georgios Spyropoulos and co-authors now show that the properties of the gamma rhythm can be very well explained by a different kind of model: a linear, damped harmonic oscillator driven by noise. In such a system, quasi-oscillatory behavior emerges because of resonance to noise (some non-rhythmic input). Damped harmonic oscillators are not genuine, self-sustained oscillators that can show synchronization or can be entrained. Imagine a ping pong ball: If you apply some force to it by pushing it off the table, it can transiently move in a certain frequency range and will dissipate its energy before it comes to a halt again. So in this case, we can think of the brain area (or a part of a brain area) as a damped harmonic oscillator that is driven by some external, non-rhythmic inputs from the previous brain area and shows some quasi-period behavior because it amplifies the noisy inputs in some frequency range. This kind of system does not really oscillate by itself but simply amplifies the noisy inputs in a certain frequency range.

A simple and elegant model

The authors analyze many properties of how the amplitude and duration of the rhythm vary. They provide a simple and elegant model of many properties of the gamma rhythm. The authors show that certain strong relationships that have been reported in the past, like a correlation between the instantaneous amplitude and duration of the gamma rhythm, can be explained by a much simpler mechanism than assumed. For example, they show that the duration of the current and the next cycle are essentially uncorrelated, which can be explained by the noise-driven behavior of the oscillator. Furthermore, they demonstrate why bursts emerge when amplitudes remain high for a while, as it naturally takes time for the oscillator to relax.

Finally, they show that, unlike previously proposed, the amplitude and the frequency of the rhythm are only weakly correlated. “We started this project by trying to find similar statistical properties as previously described for the hippocampus but this time in the monkey visual cortex,” Georgios Spyropolous tells. “But when we used the same method on noise signals that did not contain any rhythm, we observed the same correlations. We thus had to spend a lot of time developing and testing new methods to characterize the instantaneous properties of brain signals. When we applied these methods, a simple linear model was sufficient to explain the remaining correlations.“ Even though the authors only analyzed activity in area V1, they believe that their model may potentially explain quasi-rhythmic behavior in many other brain areas or species.

“Gamma is only a real ‘rhythm’ during certain periods”

Senior author and ESI research group leader Martin Vinck explains some aspects of the functional ramifications of the work: “A lot of the conceptual theories on gamma rhythms and communication are based on the idea of synchronization and entrainment. But for these linear, damped harmonic oscillators, it remains unclear how those ideas and concepts make any sense. Furthermore, we observe a high degree of variability from cycle to cycle, which means that small differences in the frequency of a rhythm would need a long integration time to be decoded. That is quite consistent with work by Thomas Akam and Dimitri Kullmann. Finally, the gamma ‘rhythm’ is only a real ‘rhythm’ during certain periods when the amplitude is high, just by chance. But there are many periods where the rhythm disappears. If these rhythms were necessary for inter-areal communication, you would expect a system that showed a lot of variabilities. Whether this is a bug in the system or a design feature – we don’t know…”

It is clear that the authors have set a new standard for analyzing rhythms in the cortex and how to understand (and not to understand!) their moment-to-moment variability. The work challenges existing conceptions of these rhythms and their function but may pave the way toward new theories based on the model developed by the authors.