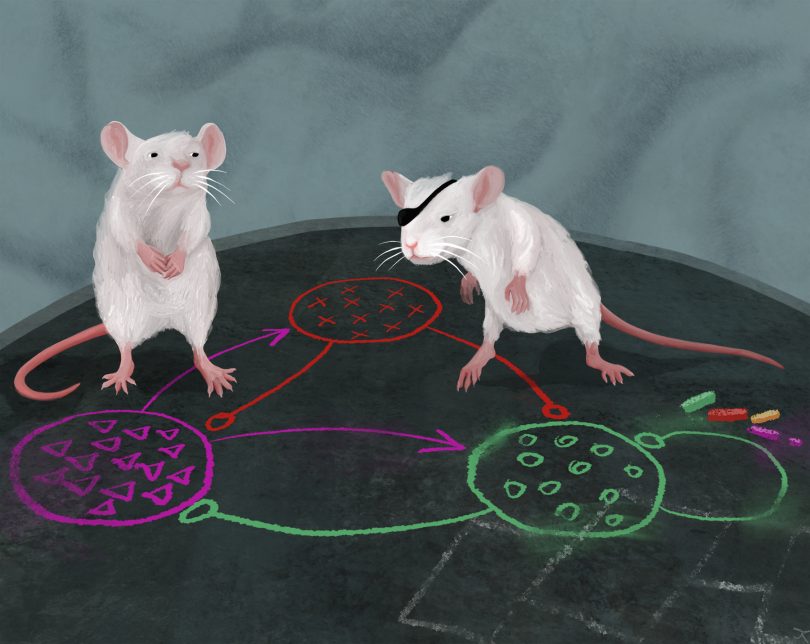 Synaptic plasticity regulates network activity in the sensory cortex of rodents who were deprived of vision in one eye. (C) Max Planck Institute for Brain Research / J. Kuhl

During development, lack of sensory experience elicits powerful plasticity mechanisms that alter brain circuitry. Many inhibitory neuron subtypes are known to influence circuit dynamics, however, how they interact with plasticity is not yet fully understood. Scientists at the Max Planck Institute for Brain Research in Frankfurt have investigated how synaptic plasticity in rodents, who were deprived of vision in one eye, affects network activity in a circuit model of the sensory cortex. Their findings point to the role of different inhibitory interneuron subtypes to explain the temporal pattern of firing rate change of excitatory and inhibitory neurons during sensory deprivation.

Multiple plasticity mechanisms interact and balance each other as they shape neural circuits during their development. A way to visualize the action of these mechanisms is to break the system and observe how it reacts. For decades, experimental neuroscientists have used monocular deprivation, a closure of one eye during specific periods in development. Regardless of its rich tradition in neuroscience, the effects of monocular deprivation still leave scientists with many unsolved riddles.

Only recently, experimentalists found that the firing rates of excitatory and inhibitory neurons are regulated in a distinct, cell-type specific manner by the plasticity induced by ongoing monocular deprivation. To investigate how the cell-type specific regulation is achieved, Julijana Gjorgjieva, research group leader at the Max Planck Institute for Brain Research and Professor at TU Munich and her graduate student Leonidas Richter developed a mechanistic model of the cortical circuit to study how the interactions of experimentally observed changes to synapses (the connections between neurons) regulate activity.

“We found that cell-type specific regulation is not easily achieved in a simple model of excitatory and a single type of inhibitory neurons as it is commonly used in modelling studies. We tied this result to the so-called paradoxical effect, which decreases inhibitory firing rates even when they are driven”, explains Richter.

The scientists analyzed how this effect plays out with the more complex plasticity induced by monocular deprivation. This allowed them to investigate the conditions for modulating excitatory and inhibitory firing rates in opposite directions. “We discovered that the diversity of inhibitory interneurons in the cortex is key to capture the regulation of firing rates especially when neurons are strongly connected as is the case in the cortex.”

“Diverse interneurons are known to play important specific roles in cortical computations. Our findings suggest that they also have a key role already in the development of the circuitry underlying these computations”, says Gjorgjieva.