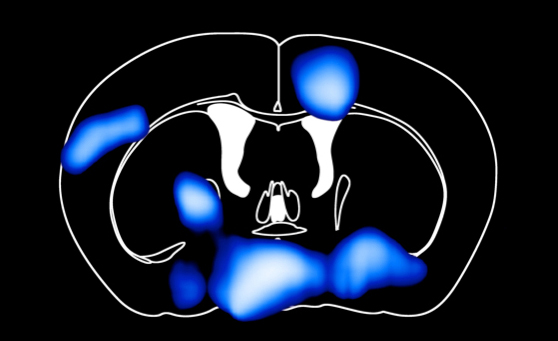 Cross-section through the brain of a mouse: regions with reduced uptake of glucose after three days of a high-fat diet (blue: slightly reduced, white: greatly reduced).© MPI f. Metabolism Research

A high-fat diet of three days in mice leads to a reduction in the amount of glucose that reaches the brain. This finding was reported by a Research Group led by Jens Brüning, Director at the Max Planck Institute for Metabolism Research in Cologne. The mouse brain restored its sugar uptake after four weeks, albeit at the cost of the rest of the body.

High-fat-content foods throw our bodies out of kilter. Obesity and diseases such as type 2 diabetes can be the result. But what does a high-fat diet actually do to our brain? Scientists from the Max Planck Institute for Metabolism Research in Cologne have looked into the brains of mice to understand how obesity and diabetes develop.

“A high-fat diet reduces the uptake of blood glucose into the brain in as little as three days. So the brain is starving, even though the mice are consuming a lot of calories daily. Responsible for this is the protein GLUT-1, which is the most important glucose transporter at the blood-brain barrier,” explained Alexander Jais, author of the study. Possible triggers for the reduction of the GLUT-1 transporter are free saturated fatty acids that have a toxic effect on the cells of the blood-brain barrier. The brain lacks glucose in significant areas: the hypothalamus, which controls metabolism, and the cerebral cortex, responsible for learning and memory.

The brain takes action to compensate for its lack of energy. Macrophages, specialized cells in the immune system, produce the growth factor VEGF, which boosts the production and function of GLUT-1, and release it directly at the vascular endothelial cells of the blood-brain barrier. Normal glucose levels can then be measured in the brain after four weeks, even though the mice continue to eat a high-fat diet. If the mice have no VEGF, glucose uptake in the brain remains reduced. “As a result of this, the mice learn more slowly and have impaired memory,” said Jais.

The selfish brain
Balancing the brain’s need for sugar when the diet remains high in fat can only be done at the cost of the rest of the body. “We call it the selfish brain because it gets its glucose by stimulating the body’s appetite for sweet foods and in the long run preventing the uptake in muscles and fat. The cells in the musculature are becoming resistant to insulin, the hormone that normally regulates glucose uptake in the cells of these organs. Ultimately, this leads to the development of diabetes,” explained Jais.