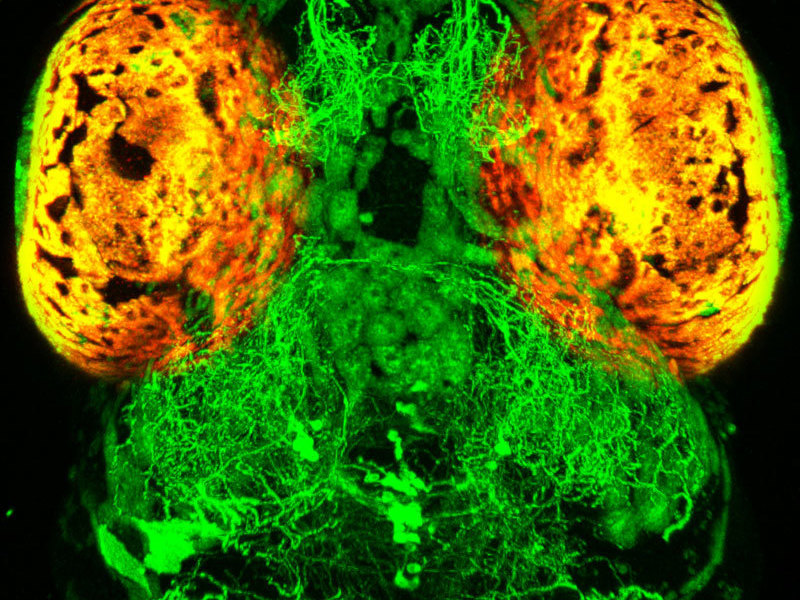 Serotonergic nerve cells (green) have broadly distributed connections in the zebrafish brain. A new paper now shows that they influence how the brain perceives objects. (The eyes of the fish larva are shown in orange.) © Max Planck Institute of Neurobiology / Filosa

Anyone who has gone shopping while hungry knows that the shopping cart often ends up with more items than initially intended. It almost seems as if we notice food more when hungry. Herwig Baier and his team at the Max Planck Institute of Neurobiology recently showed that this is actually the case in the brain of larval zebrafish. The neurobiologists demonstrated, that hunger recruits additional nerve cells in a specific brain region via two molecular signaling pathways. As a consequence, potential prey objects activate significantly more nerve cells in hungry fish, resulting in the increased pursuit of these objects. The study shows that hungry animals perceive objects differently than satiated fish and are more willing to take risks when looking for food.

Animals constantly need to make decisions: Is an object a potential prey or a threat, such as a predator? The decision to approach or escape from the object may be essential for survival. However, in a complex environment, decisions need to be flexible. For example, a starving animal should not “play safe”. Herwig Baier and his team investigated how hunger leads to changes in the brain’s representation of food, which in turn influences behavioral decisions in larval zebrafish.

In their experimental setup, the scientists used computer animation to let dots of different sizes drift through the visual field of the fish. The fish reacted as expected: They pursued the smaller dots as potential prey while avoiding the larger dots. “Interestingly, hungry fish pursued small dots more often than fed fish and escaped less often from larger dots“, says Alessandro Filosa, the first author of the study. “Hungry fish thus appear to take a greater risk.“

“Zebrafish are an excellent system to study the neuronal basis of behavior”, explains Herwig Baier. The advantage of working with the approximately five-millimeter-long fish is their transparency. This, combined with genetic modifications and the latest microscopy and staining methods, enabled the scientists to see changes in nerve cell activity of previously fed and hungry fish directly under the microscope.

The results showed that hunger can influence behavior via at least two molecular signaling pathways: First, hunger inhibits the HPA axis of the neuroendocrine system – the system, encompassing the complex interactions between hormonal and nervous systems. Second, hunger leads to an increased activity of serotonergic neurons. As a result of the two effects, additional nerve cells in the fish tectum become responsive to small and medium-sized dots. The tectum is the brain region that links visual inputs to behavioral outputs. Consequently, the representation of potentially edible objects by hungry fish increases as more nerve cells respond, and the fish are more likely than satiated fish to pursue the dots. The study thus showed that the visual classification of objects is modulated by the animal’s feeding state.