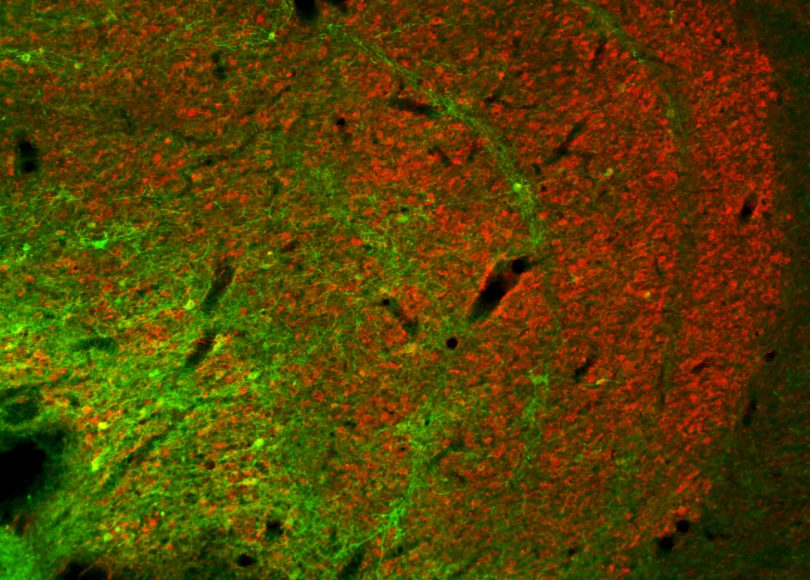 Researchers show how neural wiring works in the visual system

To date, scientists have largely been in the dark with regard to how individual circuits operate in the highly branched networks of the brain. Mapping these networks is a complicated process, requiring precise measurement methods. For the first time, scientists from the Max Planck Institute for Biological Cybernetics in Tübingen, Germany, together with researchers from the Ernst Strüngmann Institute in Frankfurt and Newcastle University in England, have now functionally proven a so far poorly understood neural connection in the visual system of monkeys using optogenetic methods. To this end, individual neurons were genetically modified so that they became sensitive to a light stimulus.

For decades microstimulation was the method of choice for activating neurons – the method proved to be reliable and accurate. That is why it is also used medically for deep brain stimulation. The Tübingen-based scientists were now able to show that optogenetics, a biological technique still in its infancy, delivers comparable results.

With optogenetics it is possible to directly influence the activity of neurons by light. To do this individual neurons are genetically modified with the help of viruses to express light-sensitive ion channels in their cell membrane. Through blue light pulses delivered directly into the brain, the modified neurons can then be systematically activated.

Watching the cells while they see

Using this method, the researchers studied the visual system of macaques. “The brain of this non-human primate is very similar to the human brain. Its cerebral cortex is organized in the same way as ours and is therefore vital to brain research,” explains Nikos Logothetis, Director of the Physiology of Cognitive Processes Department at the Max Planck Institute for Biological Cybernetics. Furthermore primates are thus the only animals that also have the so-called konio cells and a highly complex visual processing system.

Signals that reach the eye are forwarded via the lateral geniculate nucleus (LGN) to the visual cortex. In both humans and monkeys, the LGN consists of six layers and contains magno, parvo- and konio-cells. Magno cells process signals containing contrast and movement information, while parvo cells are important for perceiving color. Very little is known about the function of the konio cells due to their position within the geniculate nucleus that makes them difficult to study. By means of optogenetic stimulation, the researchers were now able to prove that konio cells are linked to the primary visual cortex. 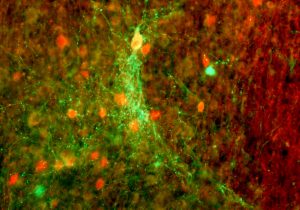 “We chose to study this circuit in the visual system because it represents a defined and highly structured system because of the clear segregation between cell types”, explains Carsten Klein from the Max Planck Institute for Biological Cybernetics. In addition to providing insights into the structure of the visual system, the study also provides methodological insights that could be relevant for the medical application of deep brain stimulation and optogenetics.

The optogenetic modulation of neurons functions is at least in theory more cell-type specific than microstimulation and also has the advantage that neurons can be activated or inactivated. If a cell population is removed from a circuit the function it performs can be identified. Therefore, instead of an activating protein, an inhibitory protein is channelled into the neurons. If it is stimulated with a light pulse, it suppresses the activity of the cells.

Through optogenetics, the cooperation between individual cells can also be studied with much greater precision. Michael Schmid from Newcastle University, who had the idea for thise study, acknowledges the potential of optogenetics: “The method is very interesting for us. If it is refined further, we could image and map more complex circuits and their individual components in the brain.”