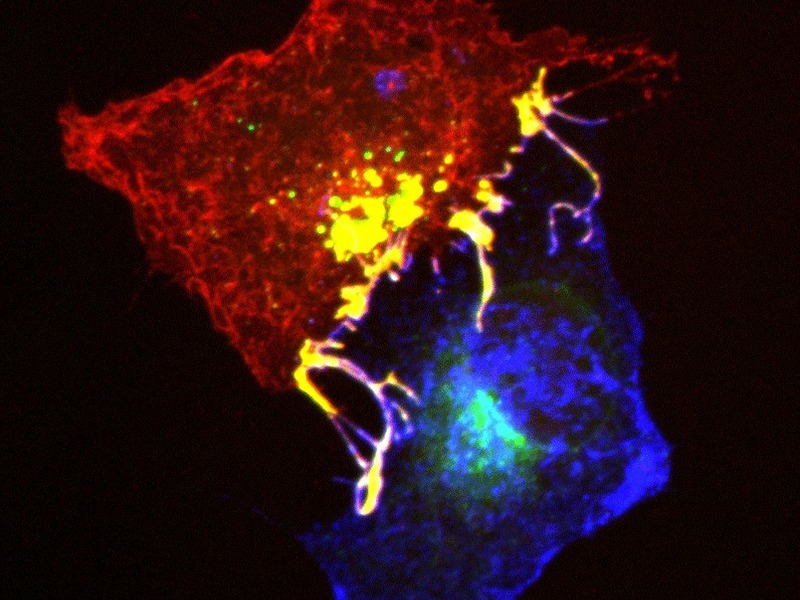 Ephrins (blue) and Ephs (red) form complexes (yellow) at cell contact points. To enable the cells to separate from each other, they are pulled into one of the cells with the help of the signalling proteins Tiam and Rac. © MPI of Neurobiology/Gaitanos

When cells grow and divide, they come into contact with other cells. This happens not only during development and regeneration and after injury, but also during cancer growth and the formation of metastases. When cells come into contact with each other in this way, information is exchanged by proteins, which are embedded in the cell membranes and form tight lock-and-key complexes with each other. These connections must be severed if the cells want to transmit a repulsion signal. It appears that the fastest way to do this is for the cells to engulf the protein complex from the membrane of the neighboring cell. Scientists from the Max Planck Institute of Neurobiology in Martinsried have now identified the molecules that control this process.

Development is an extremely rapid process. Increasing numbers of cells are formed which must find their correct position in the body, clearly demarcate themselves from each other to form tissue, or – as is the case in the nervous system – establish contact with partner cells in remote locations. “The crowding is accompanied by orderly pushing and shoving,” says Rüdiger Klein, whose Department at the Max Planck Institute of Neurobiology studies how cells get their bearings. “A popular way for one cell to show another which direction to take is for it to repel the other cell following brief contact.” According to the scientists’ observations, the cells do not exactly treat each other with kid gloves and even go so far as to engulf entire pieces from the membranes of other cells.

When cells come into contact with each other, ephrin and Eph receptors are often involved. These proteins are located on the surface of almost all cells. When two cells meet, their ephrin and Eph receptors connect to form tight ephrin/Eph complexes. These complexes then trigger the repulsion process through intracellular signaling pathways. “This is where the problem arises, as it appears that the cells then want to separate as quickly as possible – however, the two cells are attached to each other through the tight ephrin/Eph complex,” explains Klein. So the cells do something else: they extend their own cell membranes so far over the individual complexes that the complex and the surrounding membrane detaches from the neighboring cell and is fully incorporated into the cell.

Left: Ephrin and Eph receptors are found on the surface of almost all cells. Center: When cells come into contact with each other, the two proteins form a tight complex. This triggers a signaling chain which causes the cell membrane to protrude. This process is controlled by the Tiam and Rac molecules and results in the reformation of the actin cytoskeleton. Right: The cells separate when one cell fully engulfs the ephrin/Eph complex through endocytosis.
© MPI of Neurobiology/Gaitanos

The Max Planck researchers discovered as early as 2003 that cells can use this process, known as endocytosis, to separate from each other. Thanks to progress made in molecular biology since then, they have now managed to show how the process is controlled in detail.

With the help of a series of genetic modifications and the targeted deactivation of individual cell components, the scientists succeeded in demonstrating that Tiam signaling proteins are activated through the formation of the ephrin/Eph complex. As a result, Rac enzymes become active which, in turn, cause the engulfment of the ephrin/Eph complexes by the cell membrane through the local restructuring of the actin cytoskeleton. If one of these components is missing, this engulfing process through endocytosis is blocked and the cells do not repel each other but remain attached.

The clarification of this signaling pathway is important, as it provides a better understanding of the development of neuronal networks and other organ systems. The findings are also of considerable interest for cancer research: thanks to their ability to control cell repulsion, ephrin and Eph receptors play a major role in the penetration of tissue by cancer cells and in the formation of metastases. For this reason, receptors and their connection partners are the focus of current medical research. Better understanding of this signaling pathway, through which cell repulsion is controlled, could enable the development of new drugs to combat cancer.