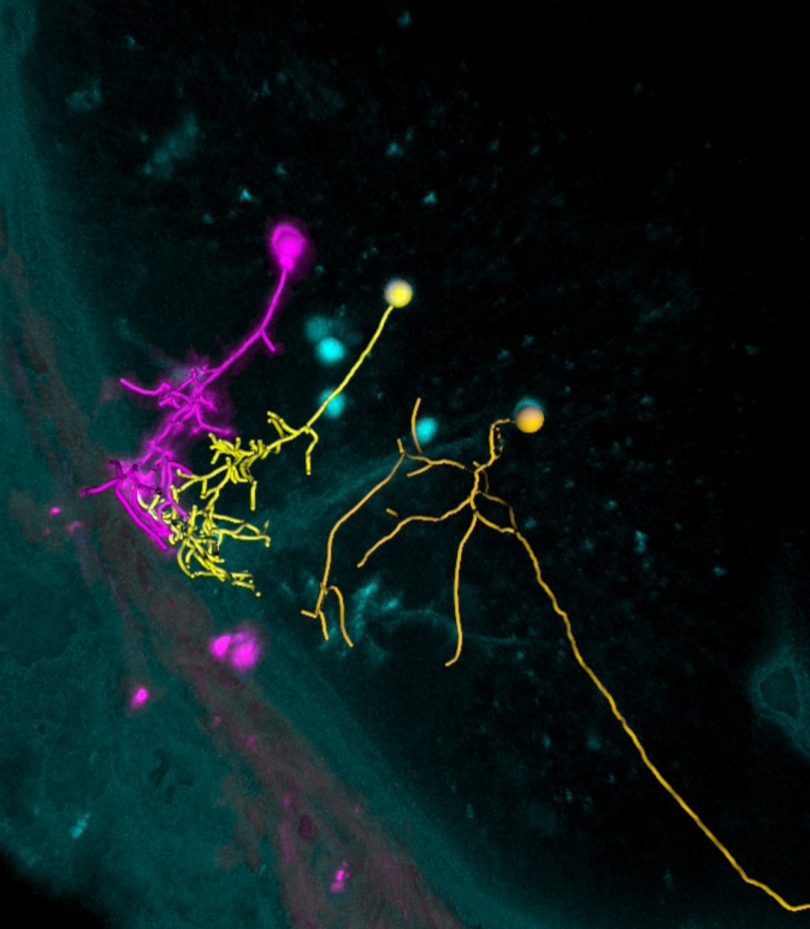 Researchers can activate individual neurons in the zebrafish brain with light (magenta) and observe which neighboring cells are connected to the neuron in the same circuit (yellow). (c) MPI of Neurobiology / Förster

Using light alone, scientists from the Max Planck Institute of Neurobiology in Martinsried are now able to reveal pairs or chains of functionally connected neurons under the microscope. The new optogenetic method, named Optobow, allows probing the pathways along which information flows by targeted activation of individual neurons and monitoring the responses of neighboring cells. The shape of the cells and their contact points are also revealed – even in dense tissue in which the thin fibers of thousands of cells are interwoven. With Optobow, it is thus possible to discover individual components of functional circuits in the living brain.

Modern methods provide increasingly detailed insights into the structure and functions of the brain. It is now possible to observe under the microscope when and where neurons are active during a particular task, such as sensory perception or behavior. However, it is still largely impossible to establish whether the active cells are connected to each other and to identify the sequence in which they exchange information. To date, such information could only be obtained, in part and with considerable effort, using electrophysiology and electron microscopy methods.

With electrophysiology, the activity of neighboring cells is measured using very thin, hollow needles, which serve as electrodes. These are inserted into the brain through holes in the skin and the skull of the animal. However, it is almost impossible to record activity from very small, densely clustered or deep-lying neurons, and it is also difficult to trace long connection pathways between neurons. Moreover, impulses from only one, or few cells, can be recorded at a time. With modern electron microscopy processes (connectomics), all neurons and their connections in a fixed brain are recorded, layer by layer, by a scanning electron microscope and then reconstructed on a computer. Although this method provides a fantastically detailed snapshot of the neural wiring pattern, the information about the dynamic transmission of nerve impulses in the living brain is lost. Both of these approaches thus have clear limitations. “We were looking for a way to observe the connections and transmission of information between nerve cells in the active brain without killing or disrupting the brain,” explains Dominique Förster. Motivated by this quest, Förster and his colleagues from Herwig Baier’s Department at the Max Planck Institute of Neurobiology developed the Optobow method.

With the help of genetic technology methods, the researchers infiltrated the light-sensitive ChrimsonR ion channel into individual neurons in the brain of zebrafish larvae. They also caused the neurons in the surroundings of these ChrimsonR cells to produce GCaMP6, a calcium indicator. A bright fluorescent protein, with which the researchers could make the shape of the neurons, their intricate ramifications and synapses visible, was coupled in turn to GCaMP6. “This sounds very complicated at first, and it took us quite a long time to develop the method, but it was worth the effort,” says Dominique Förster. Because zebrafish larvae and their brains are transparent, the Max Planck researchers were able to activate the ChrimsonR cells simply by focusing light on the fish. The direct illumination of individual neurons, even those located deep in the brain, was made possible by another method which was developed more or less simultaneously by Baier’s Department.

This meant that the researchers were able to activate individual ChrimsonR cells in the living fish brain using light. When the ChrimsonR cell triggered an action potential in a neighboring cell, the calcium indicator there reacted to the associated ion influx and the fluorescent protein caused the cell to light up and thus stand out of the crowd through its change in brightness. This enabled the scientists to observe, live under the microscope, which neuron types were activated following the activation of the initial cell, and when and where they became active.
New method with considerable potential

The researchers have already succeeded in demonstrating how useful the new method is in their first experiments in the larval zebrafish brain: they were able to show that some neurons that transmit information from one brain area to another make local synapses and thus leave a copy of the information in the area of origin.

“I don’t know of another light microscopy method that would have enabled us to discover this unexpected connection”, says Herwig Baier, who headed the study. “With Optobow we were able to show for the first time which neurons are connected with each other in the brain of a living, active animal, for example when a behavioral command is generated in the brain.”

Optobow should enable scientists to make significant progress in the identification of the cellular components of neuronal circuits and in understanding their functions, thus complementing connectomics and electrophysiology. With the help of this method, it will also be easier to research dynamic changes in the cellular connections, for example during learning and development.