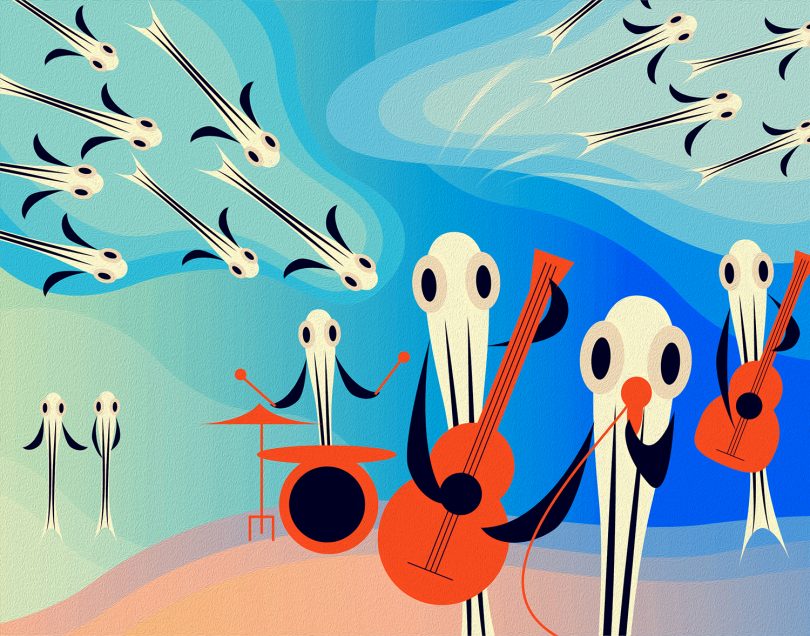 Zebrafish react with individual differences to loud sounds. A selection towards pronounced behavioral responses shows, within a few generations, also in differences in brain activity. (c) MPI of Neurobiology / Kuhl

Personality varies widely. There are bold and reserved individuals, who behave very differently when faced with the same environmental stimulus. What is true for humans also applies to fish: their behavior shows a range of individual differences. By selectively breeding zebrafish, scientists from the Max Planck Institute of Neurobiology were able to show that distinct personality traits rapidly emerge and manifest not only in the behavior but also through far-reaching changes in the brain.

Young zebrafish are just five millimeters long and almost transparent. Nevertheless, the tiny fish display a spectrum of behavior in response to external stimuli. While some animals flee in panic at a loud sound, other fish remain calm. If the sound is repeated, fish in one group learn to ignore it quickly, while others never really get used to it. Between these two extremes – relaxed or skittish – there is a whole range of behavioral expressions.

Carlos Pantoja and colleagues in Herwig Baier’s team were now able to show that selection for a specific behavioral trait can also change the fishes’ brain activity surprisingly quickly. The researchers mated animals only within the extremely relaxed and extremely skittish groups. After just two generations, the brains of the fry selected for skittishness differed significantly from the brains of the calm offspring.

In the transparent fish larvae, the scientists were able to observe which brain regions were activated by the loud sound. The offspring of the two behavioral extremes showed clear differences in neuronal activity in a part of the hypothalamus and in the so-called dorsal raphe nucleus. A noticeable difference between these two brain regions is that the plastic part of the hypothalamus contains neurons that secrete dopamine, while the raphe nucleus mainly produces serotonin. Dopamine and serotonin are two prominent neuromodulators that have also been associated with personality differences and even psychiatric conditions in humans.

“The ratio of cell activity in these two brain regions could regulate the sensitivity of an individual fish’s reaction to the sound and how quickly it gets used to it,” explains Carlos Pantoja. “However, this is certainly only one component, as there are also differences in a whole range of other brain areas.”

Interestingly, the offspring of the two fish groups not only showed the expected differences in their startle response. While in the larval stage, the more relaxed fish fry was also significantly less spontaneously active. As adults, these fish then adapted much slower to a new environment than adult jumpy fish. “At first glance, this sounds paradoxical. But it could be that the early tendency to fearful overreactions tends to dampen the later stress response,” says Pantoja. Similar long-term effects of early stress processing have been reported in mammals.

In both groups of fish, the dopamine-releasing part of the hypothalamus was activated during the startle reaction. However, while this region was only switched on by the sound in the relaxed fish, it was permanently active in the skittish fish. After a mere two generations of behavioral selection, these animals already seemed to be constantly prepared to escape.

“The pace at which personality traits can be shifted and fixed in evolution is remarkable,” reflects Herwig Baier. “The process might be similarly rapid in populations of Homo sapiens.” The zebrafish could perhaps reveal some of the involved brain structures and the genetic basis of this plasticity.