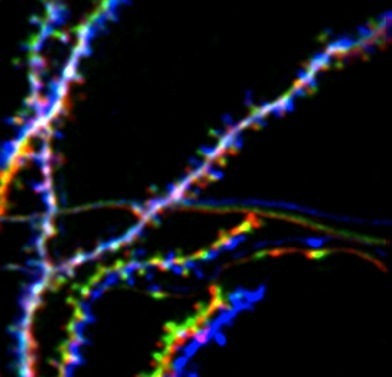 Scientists study how new impressions are transferred in long-term memory

Brain research was revolutionized by the famous case of patient H.M., who could not remember any new experiences following brain surgery in 1953. Only a small area of the brain – the hippocampus – is responsible for encoding new impressions in long-term memory. Alessio Attardo, now group leader in the Department of Stress Neurobiology and Neurogenetics at the Max Planck Institute of Psychiatry in Munich, showed that dendritic spines and synapses in mouse hippocampus only last as long as it takes to transfer information into long-term memory. For their experiments the scientists developed new microscopy technology and sophisticated mathematical models.

In 1953, Henry Molaison, widely known as patient H.M., lost his ability to store new memories. What happened? Since childhood, H.M. had suffered from severe epileptic seizures. In pioneering surgery, finger-sized parts of the medial temporal lobe including the hippocampus were removed from both of his brain hemispheres. Indeed, his epileptic seizures became less frequent, but from then on, H.M. could no longer store new memories – his brain could no longer transfer new experiences into his long-term memory. We now know that various kinds of information coalesce in the hippocampus, are processed and sent back to the cerebral cortex for long-term storage. The hippocampus is the central switch for the transfer of memories from short-term to long-term memory.

What happens at the cellular level during information processing in the hippocampus? Since 2008, neuroscientist Alessio Attardo, now group leader in the Department of Stress Neurobiology and Neurogenetics at the Max Planck Institute of Psychiatry in Munich, has been studying this topic together with James Fitzgerald, a theoretical physicist now at Harvard University (USA), under the supervision of Mark Schnitzer at Stanford University (USA).

Nerve cells communicate with each other via so-called synapses: specialized structures located on finger-like protrusions called dendritic spines. When signals are sent repeatedly from one nerve cell to another, the synapses and dendritic spines between these cells become more stable. “In the brain regions responsible for long-term memory storage, there are stable dendritic spines storing memories for life and unstable dendritic spines, which are stabilized by acquisition of new information,” explains Alessio Attardo. “We thought this might not apply to the hippocampus because it specializes in transient processing of memories.”

And indeed that’s how it is. Applying the latest microscopy technology and sophisticated mathematical methods, the scientists now have very strong evidence that dendritic spines in mouse hippocampus only last for about 30 days – exactly as long as it takes to transfer memories into long-term storage in other brain regions. For their experiments Alessio Attardo and his colleagues developed a new minimally-invasive optical technique. Using a micro-endoscope in connection with a 2-photon microscope, they were able to acquire highly detailed images of dendritic spines in the hippocampus of live mice for several weeks.

“Owing to the fate of patient H.M., brain research realised the fundamental role of the hippocampus in learning and memory,” Alessio Attardo summarizes. “Our new methods open the way to completely new experiments that will elucidate the relationship between synapses and learning in the hippocampus. Our laboratory in Munich will focus on the influence of stress on the cellular processes that govern hippocampal learning.”