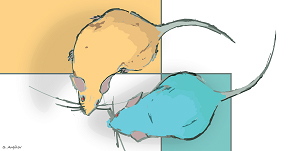 Among the male mice, subordinates appeared to be most affected by stress exposure, while in females the more dominant individuals showed a stronger behavioral change.

Chronic stress negatively impacts the well-being of women more than men, placing them at higher risk of developing mental health disorders. Sex differences and social context independently contribute to the development of stress-related disorders. The interplay between sex and social factors is important for adapting to chronic stress and might even influence physiology. The biological mechanisms behind the interaction are not well understood. Now, scientists show that both social hierarchies and sex may play an important role in how individuals respond to stress. Male and female mice even showed opposite effects in dealing with stress according to the social status.

Elena Brivio and Stoyo Karamihalev from the Max Planck Institute of Psychiatry in Munich hypothesized that an individual´s standing in the social hierarchy predicts their behavior upon stress exposure, and that this relationship differs between the sexes. They used an automated observation system that documented the behavior of mice living in all female or all male groups. Together with their colleagues from the Weizmann Institute of Science in Israel, the neuroscientists determined where each animal fits into the social structure of their group. Then, they exposed some groups of mice to mild chronic stress and compared their behavior to non-stressed rodents.

The researchers found that both sex and social status played a role in how male and female mice responded to stress. Subordinate males displayed less anxious behavior under stressful circumstances, while dominant females acted bolder and less anxious.

“We wanted to explore sex differences in how individuals respond to stress”, explains joint first author Brivio. “And we were very surprised when we found that social status predicted opposite effects for males and females”, adds joint first author Karamihalev. They saw not only how the social context shapes the response to chronic stress in a different way in males and females but that sex determines the direction of this relationship.

These differences may start in the brain. More studies are needed to understand the biological basis of these social- and sex-based differences in stress response. Learning more may help scientists understand why some individuals are more susceptible to the effects of stress and lead to the development of personalized prevention or treatment strategies for anxiety and depression.