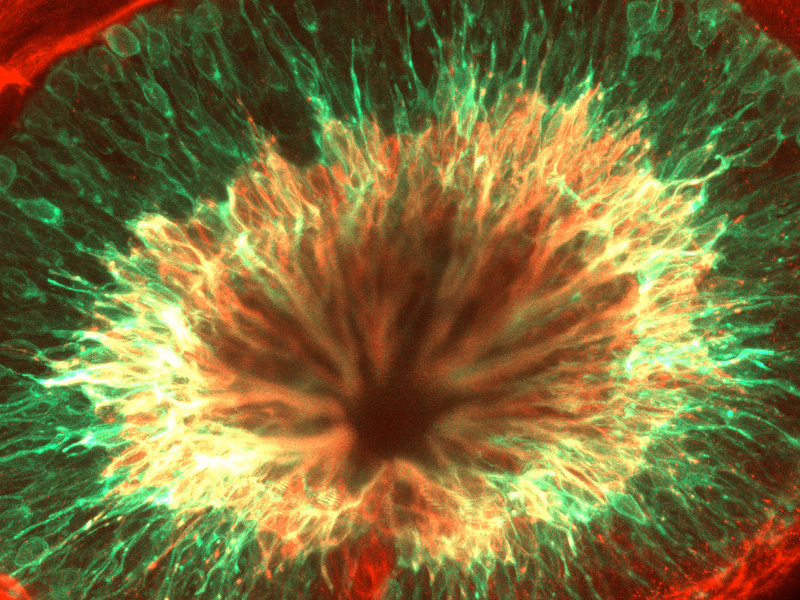 View from above on a zebrafish eye. The red and the green cells are neurons and the ‚tunnel’ in the middle is the optic nerve. © Max Planck Institute of Molecular Cell Biology and Genetics

During cell division, cell nuclei have to be positioned at the upper end, so that daughter cells can be built into retina tissue

We perceive our environment mostly with our eyes: the visual system delivers about 80 percent of the information processed in the brain. The retina contains all the neurons responsible for transmitting visual information to the brain. At the Max Planck Institut of Molecular Cell Biology and Genetics, scientists discover the importance of the position of cell nuclei for a correct formed retina.

In this context, research group leader Caren Norden and her colleagues now looked at the phenomenon why the nuclei of retinal progenitor cells move upwards towards the apical side before undergoing division. Using zebrafish as a model organism, they found that the positioning at the top of the cell is necessary for the two daughter cells to reintegrate into the tissue without problems. If the cell divides with the nucleus positioned in the centre or in the lower part of the cell, the daughter cells form clusters and the further development of the retina is perturbed.

It is a long road to the top. For the cell, moving the nucleus upwards to the top of the cell before every round of mitosis is energy consuming. So, why does it do this after all? It’s been known since 1935 that the nucleus moves upwards when a cell division is about to happen. Caren Norden’s lab and other groups previously established an understanding of the mechanics of this movement, but no explanation existed on why this is happening and how this process is triggered.

Therefore, the Norden group investigated how the elongated retinal progenitor cells of zebrafish embryos develop. The cells divide over and over again into two progenitor cells until there is a big enough pool of them. Only then, the progenitor cells differentiate into more specialized retinal neurons. The results of the study show that the cell really does everything for the nucleus to move upwards and be positioned at the top for cell division. Even if the nucleus itself starts dividing, it is hastening upwards in order to be at the top in time for the division of the whole cell. “Biologists call this a robust process”, says Norden.

The scientists were able to show that if the nucleus divides too far away from the top of the cell it is impossible for the daughter cells to reintegrate into the tissue. “The wrong cells are in the wrong place at the wrong time. They are lost in time and space”, explains Caren Norden the results. This ends with the formation of cell clusters and the development of the young retina goes wrong. Moreover, the researchers found that the upward movement of the nucleus is triggered by CDK1 (Cyclin-dependent kinase 1). CDK1 initiates the first steps that tell the nucleus that it has to move to the top. “In this study we found another cell biological building block that contributes to a healthy retinal development”, summarizes Caren Norden.