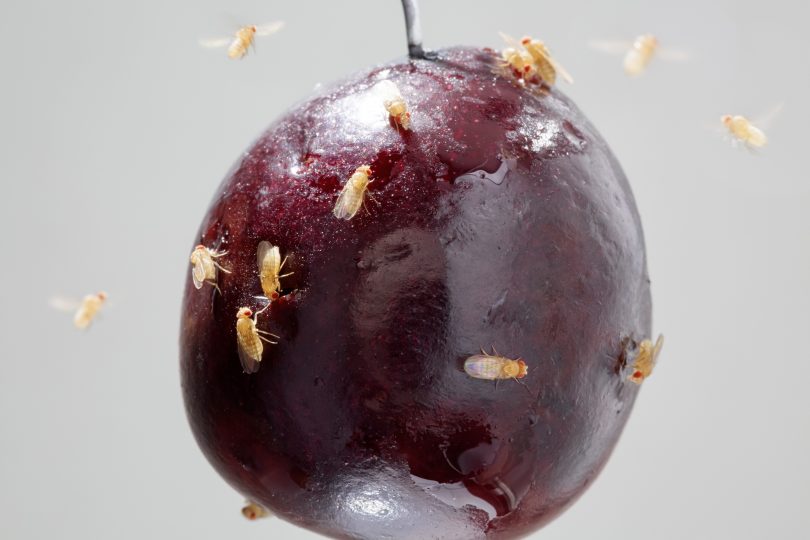 Antioxidants are natural food ingredients that protect cells from harmful influences. Their main task is to neutralize so-called “free radicals” which are produced in the process of oxidation and which are responsible for cell degeneration. Scientists at the Max Planck Institute for Chemical Ecology in Jena, Germany, and the University of Lund, Sweden, now show that vinegar flies are able to detect these protective substances by using olfactory cues. Odors that are exclusively derived from antioxidants attract flies, increase feeding behavior and trigger oviposition in female flies. (Current Biology, January 2015)

Hydroxycinnamic acids are secondary plant metabolites and important dietary antioxidants. For animals as well as humans, antioxidants are essential components of a healthy diet, because they protect the cells and boost the immune system. Notably, they prevent the emergence of too many free radicals, mostly oxygen compounds, and therefore a metabolic condition, which is generally called oxidative stress. If an organism suffers from oxidative stress, free radicals attack its cells and weaken its immune system. In fruit flies, oxidative stress is induced by immune responses to toxins produced by pathogens in the food.

Hydroxycinnamic acids are found in high amounts in fruit. Since fruit is the preferred breeding substrate of fruit flies, scientists in the Department of Evolutionary Neuroethology at the Max-Planck-Institute for Chemical Ecology in Jena, Germany, took a closer look at these substances and their possible effect on the flies.

Fruit flies are not able to smell hydroxycinnamic acids directly. However, yeasts metabolize the antioxidants and produce ethylphenols. These volatile substances activate targeted olfactory neurons housed on the maxillary palps of the fruit flies, which express the odorant receptor Or71a. Interestingly, fly larvae which are also attracted by yeasts enriched with hydroxycinnamic acids using ethylphenols as olfactory cues, employ another odorant receptor for binding ethylphenols: Or94b, which is exclusively found in larvae, and which is co-expressed with Or94a, a receptor binding a general yeast odor. Because flies cannot smell the antioxidants directly, ethylphenols provide reliable cues for the presence of these protective compounds in the food. The perception of these odorant signals has a direct impact of the flies’ behavior: They are attracted by the odor sources, show increased feeding behavior and choose oviposition sites where ethylphenols indicate that antioxidants are present in the breeding substrate.

“This form of olfactory proxy detection is not only a phenomenon in insects. It has also been shown in humans, that odors that we perceive as pleasant or appetizing, are in fact derived from important and healthy nutrients, such as essential amino acids, fatty acids and vitamins,” Marcus Stensmyr explains. The scientist, who carried out the studies in the Department of Evolutionary Neuroethology together with his colleagues, has recently moved to a position as senior lecturer at the University of Lund.

These findings demonstrate a further example of an individual neuronal pathway, which has a profound effect on the flies: from the odorant signal to olfactory neurons and dedicated odorant receptors to behavior (see also our press release “A Direct Line through the Brain to Avoid Rotten Food – A Full STOP Signal for Drosophila − Odor activation of a dedicated neural pathway by geosmin, an odor produced by toxic microorganisms, activates a hard-wired avoidance response in the fly“, December 7, 2012). The ethylphenol pathway as an olfactory proxy detection of dietary antioxidants shows yet another facet of the complex odor-guided behavior in fruit flies. The scientists will now try to identify further neural pathways involved in the detection of essential nutrients, which ultimately trigger the flies’ behavior.