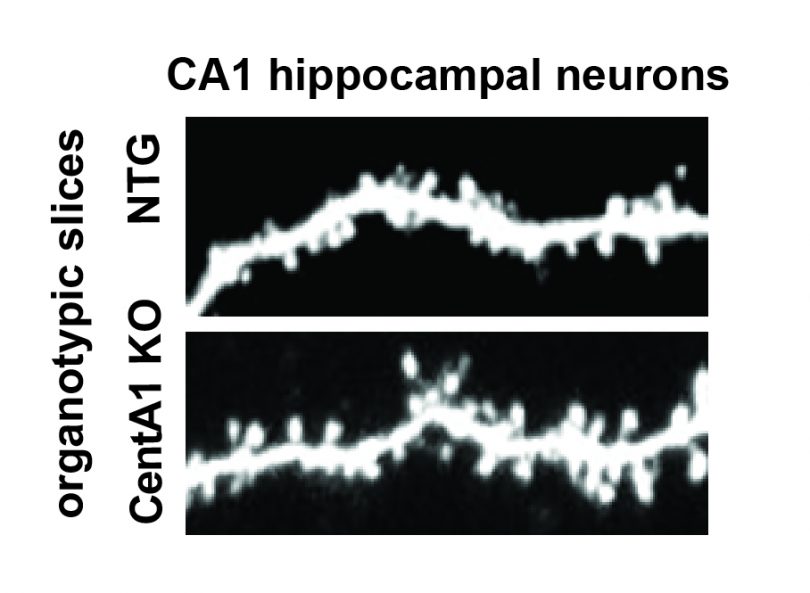 Researchers from the Max Planck Florida Institute for Neuroscience Uncover a Surprising New Role for the Protein Centaurin-alpha1 in regulating memory formation.

No piece of music better highlights the lighthearted and spooky side of Halloween quite like J.S. Bach’s Toccata and Fugue in D minor. This iconic piece features the haunting melodies of the pipe organ; an instrument that projects grandeur in both sound and appearance. The intricate stop mechanism within the pipe organ is responsible for alterations in the overall sound character and volume. As the name suggests stops block incoming air into an organ’s pipes, dramatically reducing how loud it can play. When all the stops are removed, an organ can play at its maximal volume; hence the popular saying “pulling out all the stops.”

When it comes to learning and memory, our brains share a very similar mechanism to the stops of a pipe organ. When we learn new skills or form memories, dynamic changes occur at sites of communication between neurons called synapses. Cascades of proteins are activated within, resulting in lasting alterations to synaptic strength. This process, known as synaptic plasticity, is thought to underlie how we learn and remember.

“Many of the proteins involved in synaptic plasticity, fall into the pro-plasticity category. These types of proteins are responsible for driving the intricate signaling forward, ultimately facilitating the process of learning and memory,” explains Dr. Ryohei Yasuda, Scientific Director at the Max Planck Florida Institute for Neuroscience. “By contrast a much smaller subset of unique proteins seems to have the exact opposite effect, acting to attenuate and balance the feed-forward signaling.”

These unique proteins are more similar to a pipe organ’s stops, functioning as negative regulators of overall activity. Though it’s not yet fully understood why these proteins function in this way, studying them is crucially important for gaining a more complete understanding of the biological processes involved in learning and memory.

In a recently published study in eNeuro, the Yasuda Lab has identified a new negative regulator of synaptic plasticity called centaurin -alpha1 (CentA1). A highly abundant protein in the brain, CentA1 has been previously implicated in dendritic differentiation and as a potential mediator in Alzheimer’s disease. But up until now, the exact neurobiological functions of the protein haven’t been well studied.

In order to get a better picture of CentA1’s function within the brain, the team created a novel mouse line knocking out the protein. Comparing the brains of mice lacking CentA1 with their wildtype counterparts, they found the overall brain structure and morphology to be indistinguishable between the two. While this seemed to hold true for most brain regions, a major difference was spotted within the hippocampus. In mice lacking CentA1, there was a noticeable increase in the amount of small synaptic compartments called dendritic spines across all age groups tested. Looking closer with electron microscopy, it was found that despite the increase in spines, the fine structure of these synaptic compartments remained the same. Because spine density is so closely associated with synaptic plasticity, this increase hinted at the possibility of CentA1 playing a major role.

To further explore this connection, MPFI scientists used two-photon glutamate uncaging and electrophysiology to assess both single-spine structural plasticity as well as functional plasticity within the CA1 region of the hippocampus. In mice lacking CentA1, they found a significant increase in both structural and functional plasticity compared to wildtype controls. To validate whether these changes to plasticity had functional consequences on behavior, mice lacking CentA1 were assessed in a variety of learning and memory tasks. Surprisingly, each behavioral result came up similar for both groups. One drawback to standard behavioral tasks, is that they aren’t very good at picking up improvements in learning. In collaboration with the Stackman Lab at Florida Atlantic University, a newly optimized and more challenging object-in-Place memory task was implemented. With this hippocampus-demanding test, mice lacking CentA1 showed significant improvements in associative recognition memory and enhanced learning.

“Our results indicate that CentA1 seems to be a novel, negative regulator of both synaptic plasticity as well as hippocampus-dependent memory,” notes Dr. Erzsebet Szatmari, former Senior Scientist in the Yasuda Lab and currently an Assistant Professor at East Carolina University. “It seems that rather than causing structural alterations to the brain, CentA1 exhibits its unique function through downstream signaling. Given its strong association with memory attenuation and Alzheimer’s disease, CentA1 may represent a potential therapeutic target preventing memory decline in normal and pathological aging”.