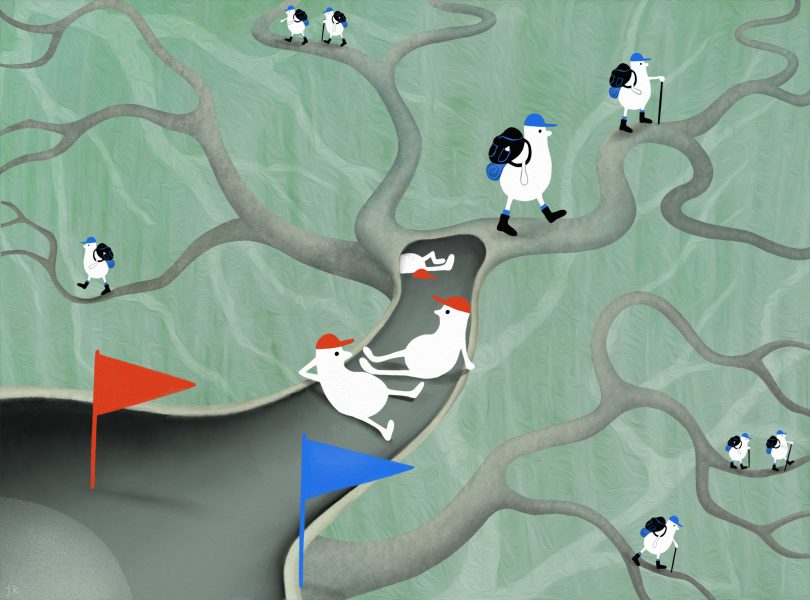 Proteins are the essential substrate of learning and memory. However, while memories can last a life-time, proteins are relatively short-lived molecules that need to be replenished every couple of days. This poses a huge logistic challenge on over 85 billion neurons in the brain: billions of proteins need to be continuously produced, shipped, addressed and installed at the right location in the cell. Scientists at the Max Planck Institute for Brain Research have now addressed a bottleneck in the protein trafficking system, dendritic branch points. They find that surface diffusion of proteins is more effective at providing proteins to distal dendritic sites than cytoplasmic diffusion.

“Dendritic arborization of neurons is one of the fascinating features that evolved to increase the complexity of the interactions between neurons. However, a more complex dendritic arbor also increases the difficulty of the logistical task to supply proteins to each part of the neuron,” says Dr. Tatjana Tchumatchenko, Research Group Leader at the Max Planck Institute for Brain Research who led the study.

Neurons distribute thousands of different protein species, necessary for maintaining synaptic function and plasticity across their dendritic arbor. However, the majority of proteins are synthesized hundreds of microns away from distal synapses, in the soma (its cell body). How do proteins reach distal sites?

“In this study, we focused on passive protein transport which corresponds to free diffusion. In contrast to active transport via molecular motors, diffusion is energetically cheap. However, there is a downside: passive transport is slow and non-directional,” explains Fabio Sartori, graduate student in the Tchumatchenko group and the lead author of the new study published in Cell Reports.

“We used experimental data provided by our collaborators and developed a new computational framework to compare two classes of proteins, based on their “transport medium”: soluble proteins that diffuse in the cytoplasm and membrane proteins,” says Sartori. “Interestingly, we find that surface diffusion is on average 35% more effective than cytoplasmic diffusion in providing proteins to downstream locations.”

Each protein has a typical distance it can cover while diffusing, this is its diffusion length. The higher this value is, the more proteins will reach distal dendrites. If a dendritic branch has a large radius, then it can carry more proteins. The combination of two factors, the width (or “radii”) of dendrites and how far proteins can move, determines the number of proteins a neuron needs to produce to supply all synapses. Sartori and colleagues found that by optimizing dendritic radii, a neuron can reduce the total protein count and thereby the protein synthesis cost by several orders of magnitude.