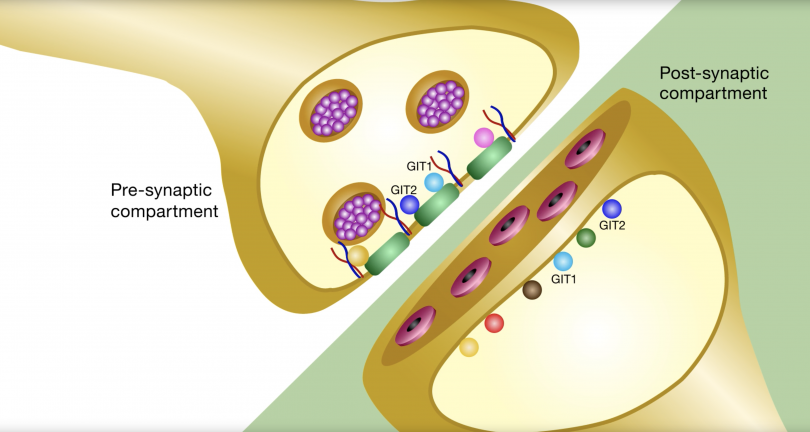 – Neurons communicate with each other through specialized structures called synapses.
– The information is transmitted in the form of synaptic vesicles that contain specific chemical messengers called neurotransmitters
– The amount and coordinated release of neurotransmitters regulates synaptic strength which is critical to maintain proper communication between neurons.
– To better understand and address a number of neurological disorders, we need a better understanding of the molecular mechanisms that regulate neuronal communication.
– A new study has revealed an important function of a class of presynaptic proteins previously implicated in neurological disorders in the regulation of synaptic strength.

In particular, the G-protein-coupled receptor kinase-interacting proteins (GITs) exert a critical control in synaptic transmission, since deletions of these proteins are lethal or cause sensory deficits and cognitive impairments in mice. In particular, GIT proteins and the pathways they regulate have been implicated in neurological disorders such as Attention Deficit Hyperactivity Disorder (ADHD) and Huntington’s Disease. Several studies have demonstrated the role of GITs in the postsynaptic terminal, but very little is known about their role in the presynaptic terminal. Researchers in Samuel Young Jr.’s research team at the Max Planck Florida Institute for Neuroscience set out to investigate the role of GITs in the giant synapse, the calyx of Held, of the auditory system – the optimal model to study the presynaptic terminal independently from the postsynaptic terminal.

In their December publication in Neuron, Drs. Samuel Young Jr. and Mónica S. Montesinos and collaborators report for the first time that GIT proteins are critical presynaptic regulators of synaptic strength. This study uncovers previously unknown distinct roles for GIT1 and GIT2 in regulating neurotransmitter release strength, with GIT1 as a specific regulator of presynaptic release probability. This regulation is likely to contribute to the disruptions in neural circuit functions leading to sensory disorders, memory and learning impairment and other neurological disorders

Future studies of Dr. Samuel Young Jr.’s lab will resolve the mechanisms by which GITs regulate synaptic strength and their roles in the early stages of auditory processing and neurological diseases. “Our work brings significant insight into the understanding of how neuronal communication is regulated, which is essential to understand the cellular and molecular mechanisms of information processing by neuronal circuits and the role of these proteins in the development of neurological diseases,” explained Dr. Young.