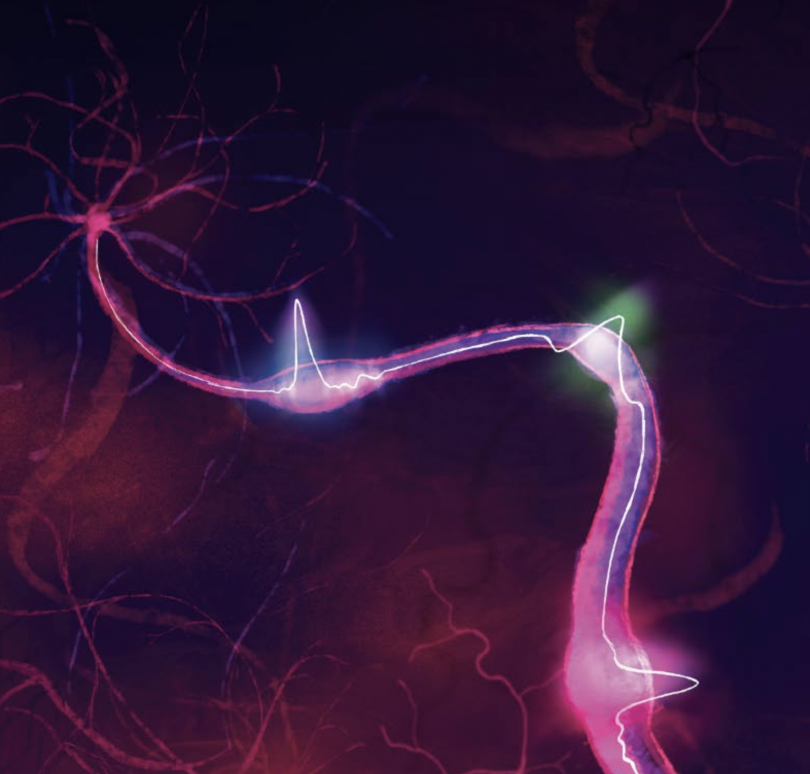 Advancing the understanding of integrative features of the nervous system

The cerebellum, part of the brain that is responsible for motor control, serves as an optimal model system to study the integrative features of the nervous system at both the cellular and network level. The circuitry of the cerebellum is strikingly simple when compared with other regions of the brain, with a regularly repeating cellular organization across its outer layer. In addition, cerebellar-dependent tasks have been well-mapped to particular anatomical sub regions. Therefore, the cerebellum offers a unique opportunity to study the dynamics of how information is transferred and transformed within and between neurons to control motor behavior.

Neurons are divided in three main parts: dendrites, axons, and the soma. While dendrites receive and integrate synaptic input, axons transmit the resultant, compiled synaptic information to specific sites in the form of action potentials. Even within these structures there is sub-specialization; dendrites often support functional domains, or dendritic spines, multiplying their computational capacity. And axons achieve a high-degree of specificity in the organization and functional influence of sodium and potassium channels, despite the simplistic classical view of action potentials as monotypic binary pulses transmitted throughout the entire extent of an axon.

In their June 2016 publication in Neuron, researchers Matthew J.M. Rowan, Ph.D., and Jason M. Christie, Ph.D., describe how they overcame a major technical challenge precluding direct examination of axonal excitability. Because of its small diameter – less than 500 nanometers – the typical axon can’t be examined by the conventional electrophysiological recordings. However, using optically-guided subcellular patching, in combination with organic actuators of neural activity, the scientists were able to sample targeted sub regions of axonal membrane including both presynaptic boutons and their attached axon shafts. This recording configuration allows for the direct assessment of the distribution and biophysical properties of ion channels and receptors expressed along an axon. And, in conjunction, it allows for the direct recording of neural signals including action potentials and subthreshold synaptic activity.

Notably, this study demonstrated that action potentials, often viewed as invariant pulses, are instead quite dynamic with their shape varying with subcellular location. The varicose geometry of boutons, alone, does not impose striking differences in spike duration. Rather, this physiology depends on the differential influence of potassium channel subtypes as well as a clustering of fast-activating potassium channels at presynaptic locations. The organizational feature described by this study allows axons to multiply their adaptive properties by tuning excitation in one axonal domain independent of other domains on an exquisitely local spatial scale, including between neighboring sites of release.

According to Dr. Rowan, the clustered arrangement and variable expression density of potassium channels at boutons are key determinants underlying compartmentalized control of action potential width in a near synapse-by-synapse manner. Such organization yields a powerful adaptive property allowing individual release sites to locally inform the duration of a propagating spike, dependent on the local abundance of channels, and separate of other sites. Dr. Christie’s research team will further investigate how spike signaling within axons is organized and modified, and the computational value of this organization to cerebellar microcircuits.