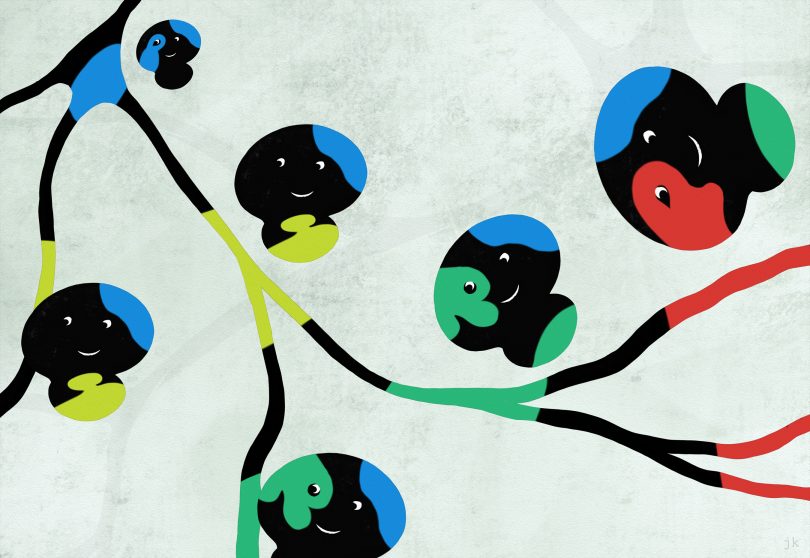 Neuronal ribosomes, the protein synthesis machinery, dynamically exchange their composition depending on the cellular location and physiological state of a neuron. © Max Planck Institute for Brain Research / J. Kuhl

Neuronal ribosomes dynamically change their composition in a context-dependent manner.

Ribosomes are large, multi-protein machines that serve as the factories that make proteins in all living cells. While ribosomes have historically been viewed as stable complexes that do not change their composition, scientists at the Max Planck Institute for Brain Research in Frankfurt have now discovered that ribosomes dynamically exchange some of their core components in neurons. Their findings suggest new mechanisms neurons (and potentially other cells) could use to fine tune gene expression.

Neurons communicate with other neurons via thousands of specialized connection points, called synapses. To maintain and adjust synaptic connections, neurons must supply proteins with nanometer and microsecond resolution. To meet this demand, neurons localize both the templates for protein synthesis (mRNAs) and the protein-making machines, the ribosomes, hundreds of microns away from the cell body, near synapses. A single ribosome consists of two subunits (large and small) made of both ribosomal RNAs and up to 80 individual ribosomal proteins.

But where are ribosomes assembled and how dynamic are they?

“Ribosomes were believed to be exclusively assembled centrally, in the nucleus of the cell and thought to maintain a stable composition until they are degraded. However, this did not fit with our observation of the mRNAs coding for many ribosomal proteins in neuronal processes, the dendrites and axons”, says Claudia Fusco, graduate student in the lab of Prof. Erin Schuman and first author of the new study.

Since ribosomes are known to be assembled in the nucleus, the presence of the ribosomal protein mRNAs hundreds of microns away presented a conundrum. Why would a neuron spend energy to localize and translate these ribosomal mRNAs far from the cell body, just to transport them back to the nucleus for ribosome assembly? Instead, Fusco and her colleagues reasoned that these ribosomal proteins must be used locally. “We asked whether a new ribosomal protein could be incorporated into a pre-existing “old” ribosome locally, for instance to respond to different cellular needs”, explains Fusco.

To tackle this question, the researchers combined a number of extremely sensitive methods, including a metabolic approach to label new proteins, a biochemical preparation to purify active ribosomes, and a very sensitive mass spectrometry pipeline, to quantify how fast new ribosomal proteins can be incorporated. “We observed an unusually fast and dynamic incorporation profile for a subset of ribosomal proteins, which persisted even when we blocked the known pathway for ribosome assembly. This indicated to us that ribosomal proteins can bind on and off (i.e. exchange from) already assembled ribosomes”, says Fusco.

Moreover, Fusco and colleagues discovered that the incorporation kinetics of these “exchangers” is sensitive to the physical location in the cell (e.g. different cellular compartments) as well as the physiological state of the cell (in “stressed” or “non-stressed” conditions).

“Swapping individual pieces rather than dismantling the whole machine can be extremely advantageous when time and resources are limited. We think neurons use this mechanism to regulate gene expression especially near synapses, where molecular adjustments need to be fast and precise”, says Schuman.