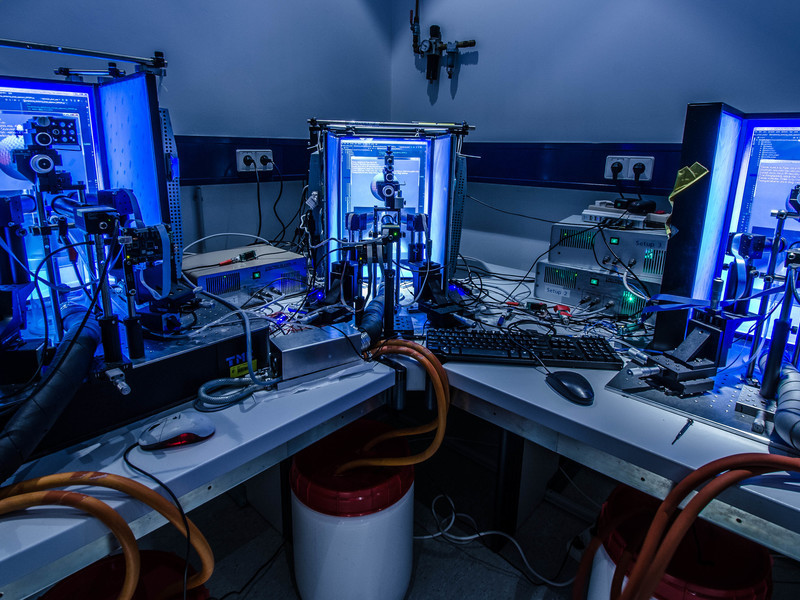 If the price of a product is reduced, willingness to buy increases – the product appears cheaper even though it is perhaps still too expensive. Our perception of the world is therefore often relative: we compare what we see with a reference point – in this case with the price before the discount. The same applies to the perception of luminance stimuli. An object appears brighter if the background is dark, and darker if the background is bright. Optical illusions help to analyze the perception of such relative contrast signals. What happens, however, at cellular level in the brain is largely unknown. Scientists at the Max Planck Institute of Neurobiology in Martinsried have now used behavioural experiments on the fruit fly Drosophila to show that spatial contrast information and motion stimuli are processed in different neural circuits.

Optical illusions lead the observer to believe that they see something which actually isn’t there. But this is not due to any problem with our eyesight. Instead, the specific conditions of the illusion show how the brain analyzes our environment. Several effects are based on relative perception: an object seems smaller if it is placed in the vicinity of large objects, or larger, if it is surrounded by smaller objects. Other illusions are based on spatial contrast. A uniformly grey bar in front of a background with a luminance gradient appears as if one side of the bar is darker than the other. Motion illusions, in contrast, simulate movement where there is none. If the previously mentioned grey bar brightens and darkens dynamically against the background gradient, for example, this gives the impression of movement. This illusion is known as a contrast motion illusion.

To understand how the brain processes the optical information, Alexander Borst and his Department at the Max Planck Institute of Neurobiology are studying a master of motion vision: the fly. Based on previous findings relating to the fly’s motion vision, the animals are not supposed to respond to motion illusions like the contrast motion illusion. “Naturally, we wanted to know more about this”, says Armin Bahl, lead author of the study published in the scientific journal Neuron. The scientists used a sophisticated behavioural testing apparatus for their investigations: tethered to a small hook, the fly walks on an air-suspended polystyrene ball surrounded by a virtual environment. The movement of the ball indicates the direction in which the fly is walking. This in turn allows conclusions to be drawn about the animal’s perception. When the scientists tested the contrast motion illusion in this experimental setup, they were surprised: flies responded very robustly to the illusions and perceived a supposed movement in the same direction, just as the human observers did.

Division of labour in the fly brain 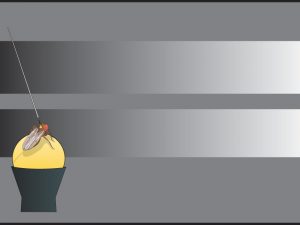 The bar in this contrast illusion is uniformly grey, even if the right side of the bar appears darker than the left. If the luminance of the grey bar now changes, both humans and flies see a motion illusion.
© MPI of Neurobiology

To examine the new findings in greater detail, the researchers used genetic silencing to switch off the cells in the fly brain that are responsible for motion vision. Such flies are completely motion-blind, as a behavioural experiment proves: if a fly is surrounded by a rotating striped cylinder, wild-type flies will rotate concurrently with the movement – to the right if the cylinder turns to the right and to the left if the rotation is in a leftward direction. This innate behaviour exhibited by flies and many other animals is known as the optomotor response. It helps animals, and us humans as well, to stabilize our course and to fly or walk in a straight line. Motion-blind flies, in contrast, display no optomotor response.

When the scientists showed the contrast motion illusion to motion-blind flies, however, they did not find any difference compared to the behaviour of normal flies. “That was a really surprising result”, recalls Armin Bahl. The scientists concluded from this that spatial contrast and motion are computed and processed in different areas of the brain. “All the evidence suggests that the fly brain analyzes what it sees via a variety of neural channels: one channel for motion, another for spatial contrast and very probably additional channels for other features of the visual environment”, summarizes Armin Bahl. In response to the question of whether this is also the case for humans, Alexander Borst’s answer is: “Very likely! The human visual system is also highly modular.” This work on contrast vision in flies thus helps us to understand how the brain perceives and processes the various stimuli in its environment.