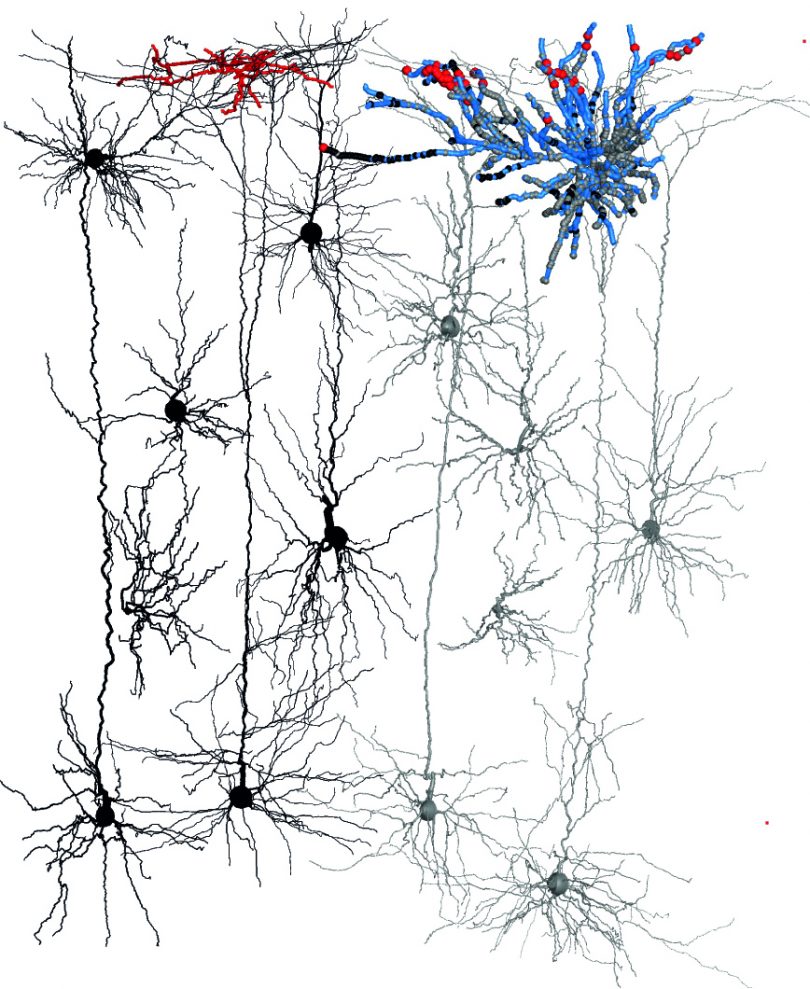 Scientists at the research center caesar in Bonn have, in cooperation with the Bernstein Center for Computational Neuroscience, the Max Planck Institute for Biological Cybernetics and the Max Planck Florida Institute for Neuroscience, discovered a potential mechanism of how cortical neurons decrease trial-to-trial variability in their response to sensory input. To gain this insight the researchers used computational modeling to generate predictions that were then tested in vivo using electrophysiological measurements.

Even the simplest sensory stimulus is thought to activate millions of synapses throughout the cortex. Until now it has been unclear how the principal neurons of the cortex, or pyramidal neurons, convert these sometimes very noisy inputs arriving at their dendrites into consistent electrophysiological responses, from one event to the next. To answer this question, scientists in the Department of Behavior and Brain Organization from the research center caesar in Bonn, an Institute of the Max Planck Society, investigated how the neurons in the most superficial part of the mammalian cortex, also known as cortical Layer 1 (L1), interact with the neurons in the underlying cortical layers.

Why is this superficial part of the cortex so special? This part of the cortex only contains one broad class of neuron, an inhibitory neuron, and, in addition, dendrites which arise from excitatory neurons in the other deeper cortical layers. Although these L1 inhibitory neurons are found only in low numbers, they are perfectly placed to potentially exert their inhibitory force on the dendrites from most underlying cortical layers. Exactly how this would be achieved was unclear, especially when the neurons were encoding stimulus inputs.

Using in vivo patch-clamp electrical recordings, combined with single neuron anatomical reconstruction techniques, scientists were able to reconstruct the 3D morphologies of the recorded L1 interneurons and integrate this anatomical and electrophysiological information into an existing biophysical model of the somatosensory cortex. Computer simulations using this model suggested that the inhibitory interneurons should reduce the variability of the neural responses to sensory input signals from one trial to the next and thus control the robustness of neural patterns, at least in the dendrites.

This hypothesis derived from the theoretical model was confirmed in vivo by combining targeted electrophysiology and neuronal population imaging using 2-photon microscopy: When L1 interneurons were prevented from being activated, an increase in trial-to-trial variability could be observed, but not a change in the structure of the inputs. This left open the question of the underlying mechanism. Through further simulations it became apparent that the mechanism that was most consistent with the data was that of distal dendritic shunting, which allows interneurons to have control over the way in which the dendrites integrate inputs arriving during sensory stimulation. In other words, this means that this is one way in which the inhibitory interneurons can influence how pyramidal neurons respond to sensory input and make their responses more consistent from trial to trial.

“A distal dendritic shunting may be – across all sensory modalities – a universal organizational principle of the cortex to specifically control the robustness of sensory-evoked responses”, says Jason Kerr, a scientific director at caesar.