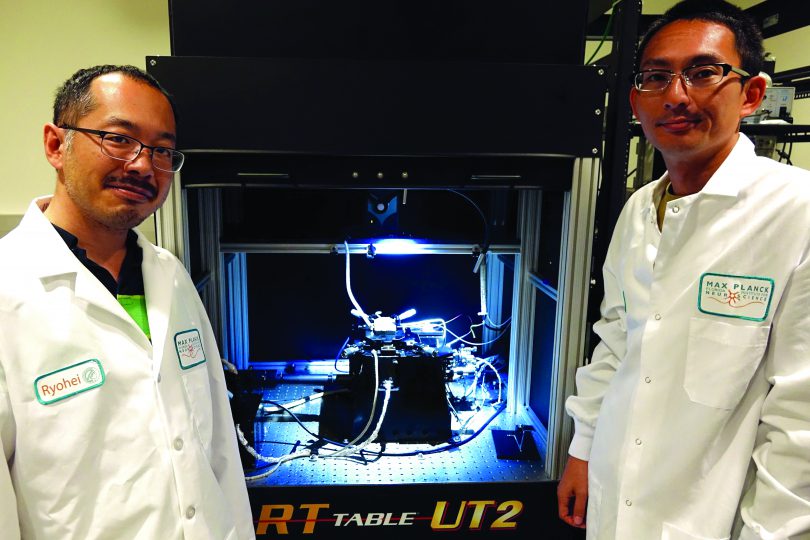 – Atomic force microscopy (AFM) is a leading tool for imaging, measuring, and manipulating materials with atomic resolution – on the order of fractions of a nanometer.
– AFM images surface topography of a structure by “touching” and “feeling” its surface by scanning an extremely fine needle (the diameter of the tip is about 5 nanometers, about 1/100 of light wavelength or 1/10,000 of a hair) on the surface.
– This technique has been applied to image solid materials with nanometer resolution, but it has been difficult to apply AFM for a soft and large sample like eukaryotic cells and neurons without damaging the sample. Additionally, image acquisition with conventional AFM is too slow to capture fast cellular morphology changes.
– Researchers have extensively modified the AFM system for imaging eukaryotic cells and neurons with high spatial and temporal resolution.
– This new system allows for analysis of cell morphology changes with a spatial resolution ~20-100 fold better than that of a standard light microscope.

While progress has been made over the past decades in the pursuit to optimize atomic force microscopy (AFM) for imaging living cells, there were still a number of limitations and technological issues that needed to be addressed before fundamental questions in cell biology could be addressed in living cells.

In their March publication in Scientific Reports, Drs. Ryohei Yasuda and Mikihiro Shibata (pictured above) at Max Planck Florida Institute for Neuroscience in collaboration with Kanazawa University describe how they have built the new AFM system optimized for live-cell imaging. The system differs in many ways from a conventional AFM: it uses an extremely long and sharp needle attached to a highly flexible plate. The system is also optimized for fast scanning to capture dynamic cellular events. These modifications have enabled researchers to image living cells, such as mammalian cell lines or mature hippocampal neurons, without any sign of cellular damage.

In particular, this study demonstrates the capability to track structural dynamics and remodeling of the cell surface, such as morphogenesis of filopodia, membrane ruffles, pit formation or endocytosis, in response to environmental stimulants. An example of this capability can be visualized in movie 1, where a fibroblast is imaged before and after treatment with insulin hormone, which intensely enhances the ruffling at the leading edge of the cell. Another example is seen in movie 2, where the morphological changes of a finger-like neuronal protrusion in the mature hippocampal neuron are observed.

According to Dr. Yasuda, the successful observations of structural dynamics in live neurons present the possibility of visualizing the morphology of synapses at nanometer resolution in real time in the near future. Since morphology changes of synapses underlie synaptic plasticity and our learning and memory, this will provide us with many new insights into mechanisms of how neurons store information in their morphology, how it changes synaptic strength and ultimately how it creates new memory.