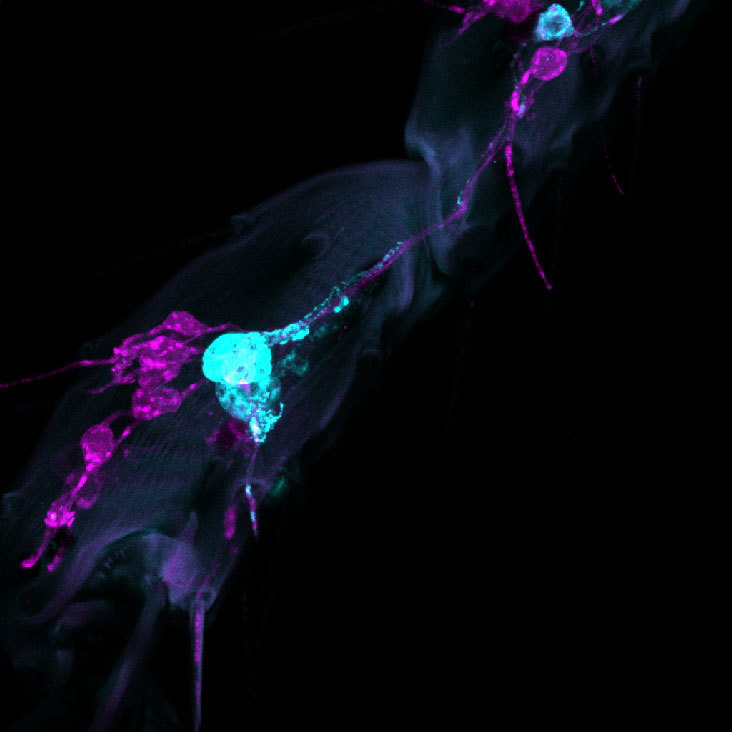 The taste neurons in the leg of the fruit fly are activated via two types of polyamine receptors. This helps the fly to choose food and good egg-laying sites. © MPI of Neurobiology/L. Loschek

The amount and composition of nutrients required by the body vary according to its state and physiological circumstances. Polyamines, for example, are needed in greater quantities whenever tissues develop, grow or regenerate. Low polyamine levels are associated with neurodegenerative diseases, ageing and fertility decline. Excess polyamines, however, may play a role in the development of cancer. Together with colleagues from Sweden, scientists from the Max Planck Institute of Neurobiology in Martinsried have now identified the receptors enabling insects to recognize polyamines in food. The study suggests that the ability to identify polyamines via the senses of taste and smell could have influenced animal survival and reproduction.

Polyamines are small organic compounds that play a role in such fundamental cellular processes like cell division and growth. Consequently, polyamine deficiency can have negative impacts on health, cognition, fertility, reproduction and life expectancy. Since excessive polyamine concentrations can also be harmful, the supply of polyamines to the body should match its current requirements. Polyamines are particularly demanded during growth, injury or periods of increased physical demands, such as pregnancy. The body is able to produce some of the required polyamines by itself, and also with the help of intestinal bacteria. Still, a considerable amount of polyamines is obtained from food. High polyamine concentrations are found, for example, in oranges, ripe cheese, tea and some legumes. As the body’s own polyamine production decreases with age, the importance of obtaining them from food increases over time.

Some polyamines have characteristic names like cadaverine, spermine and putrescine (putridus in Latin means rotten or decayed). Hence, these substances have in higher concentrations an unpleasant smell and signal danger to humans and many animals. Yet they are essential for survival in small quantities. The role played by the odour and, possibly, the taste of polyamines when it comes to choosing beneficial food remains unclear. The same is true for the mechanism by which the molecules are recognized. “The sensory systems to detect odours and tastes are very similar between flies and humans,” explains Ilona Grunwald Kadow, Research Group Leader at the Max Planck Institute of Neurobiology. “We therefore used the fruit fly as a model system to study whether and how the animals perceive polyamines and what this means for them.” The neurobiologists succeeded in demonstrating that food rich in polyamines, for example overripe fruit, considerably increases the number and survival of fly offspring.

The researchers observed that flies are strongly attracted by the smell of polyamines. Female flies preferred to lay their eggs on older, polyamine-rich fruit rather than on fresher fruit. “The flies must be able to perceive the polyamines – but how?” Ashiq Hussain, one of the study’s two first authors, sums up the key question. The scientists discovered that the animals not only perceive the odour but also use their sense of taste to find and examine polyamine-rich sources of food. Under the microscope they observed which taste and olfactory cells became active when the flies perceived the polyamines. Combined with behavioural and genetic studies, they were then able to identify three receptors, with the help of which the chemosensory neurons are able to recognize the smell and taste of polyamines. 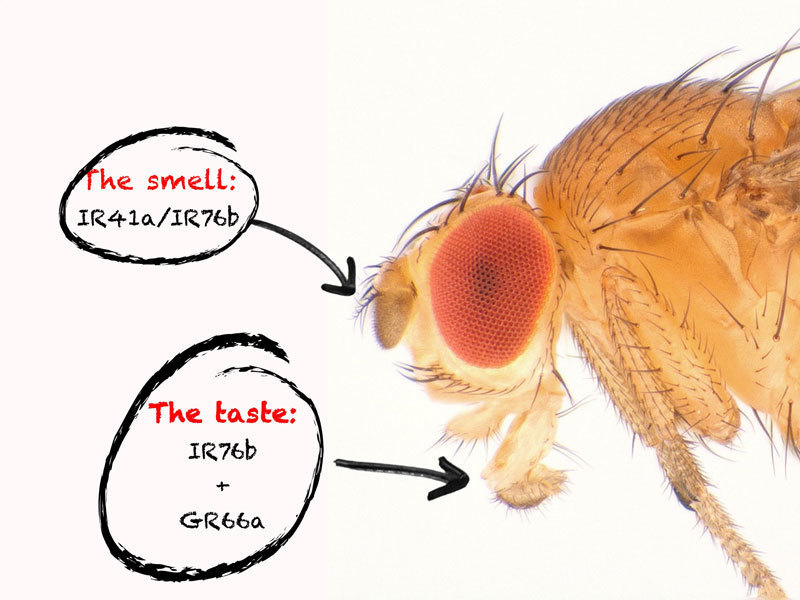 Two receptors each in the smell and taste organs enable the fruit fly to track down vital polyamines in food.
© MPI of Neurobiology/Gompel

The results show that flies find a polyamine-rich food source first by its odour, using the receptors IR76b and IR41a. The taste neurons then evaluate the quality of the identified polyamines with the help of the IR76b receptor and a bitter receptor. As is the case in humans, an excessively high polyamine concentration appears to deter the flies. They only ate or laid their eggs on polyamine-rich food if the bitter taste of the polyamines was concealed by other food components, for example sugar. “A good mechanism for recognizing the optimal concentration of these substances,” explains Ashiq Hussain.

The three receptors that enable the recognition of polyamines belong to a class of proteins that is very old, in evolutionary terms. They are related to receptors that control synaptic activities of neurons. “It is therefore possible that the recognition of polyamines through these receptors improved the chances of survival of animals at an early stage in evolutionary history,” says Mo Zhang, co-first author of the study, summarizing the significance of the findings. “If animals were able to sense these important nutritional components, they could find and consume them in beneficial quantities.” The researchers plan to investigate whether mammals can evaluate polyamines in their food as well and thus tailor their consumption to their requirements.