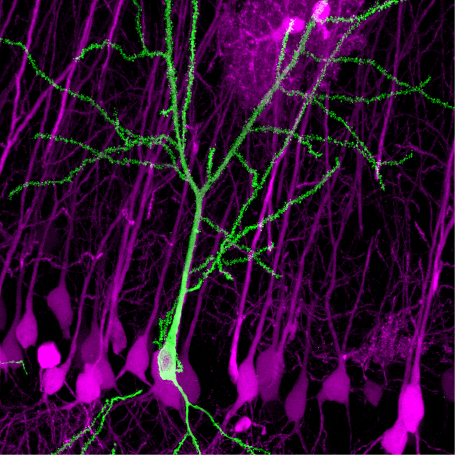 Researchers at the Max Planck Florida Institute for Neuroscience have created a new scalable, efficient and cost-effective method to accurately and rapidly locate proteins within brain cells.

Ryohei Yasuda, Ph.D., Scientific Director, and his team at the Max Planck Florida Institute of Neuroscience (MPFI) are working to understand the way cells in our brains change as we learn and form memories. But research in this area has been limited due to a lack of techniques that allow scientists to locate and visualize individual proteins within a single neuron. Current imaging methods do not provide specificity, contrast, and resolution powerful enough to see distinct proteins. Plus, they are time consuming and expensive; it can take a year or two to develop the engineered models. But when research fellow, Jun Nishiyama, M.D., Ph.D., and post-doctoral researcher, and Takayasu Mikuni, M.D., Ph.D., read about CRISPR/Cas9, a breakthrough DNA editing technique developed in 2014, they had an idea.

CRISPR is a tool built into the DNA of bacteria that the single-cell organisms use to fight infections. When a virus invades and attempts to insert its infectious DNA into that of a bacterial cell, a special section of the bacterial DNA, called CRISPR, cuts the viral DNA and renders it unable to wreak havoc. Scientists have begun using CRISPR/Cas9 to damage specific genes in cells and organisms other than bacteria. When this damage is done, there are two methods that the cell uses to repair its DNA. One is homology-directed repair (HDR), the other is non-homologous end joining (NHEJ). HDR is much more precise and rebuilds or replaces the damaged gene, whereas NHEJ degrades the damaged gene and reattaches the ends of what’s left, often deleting the expression of the damaged gene, but not replacing it. 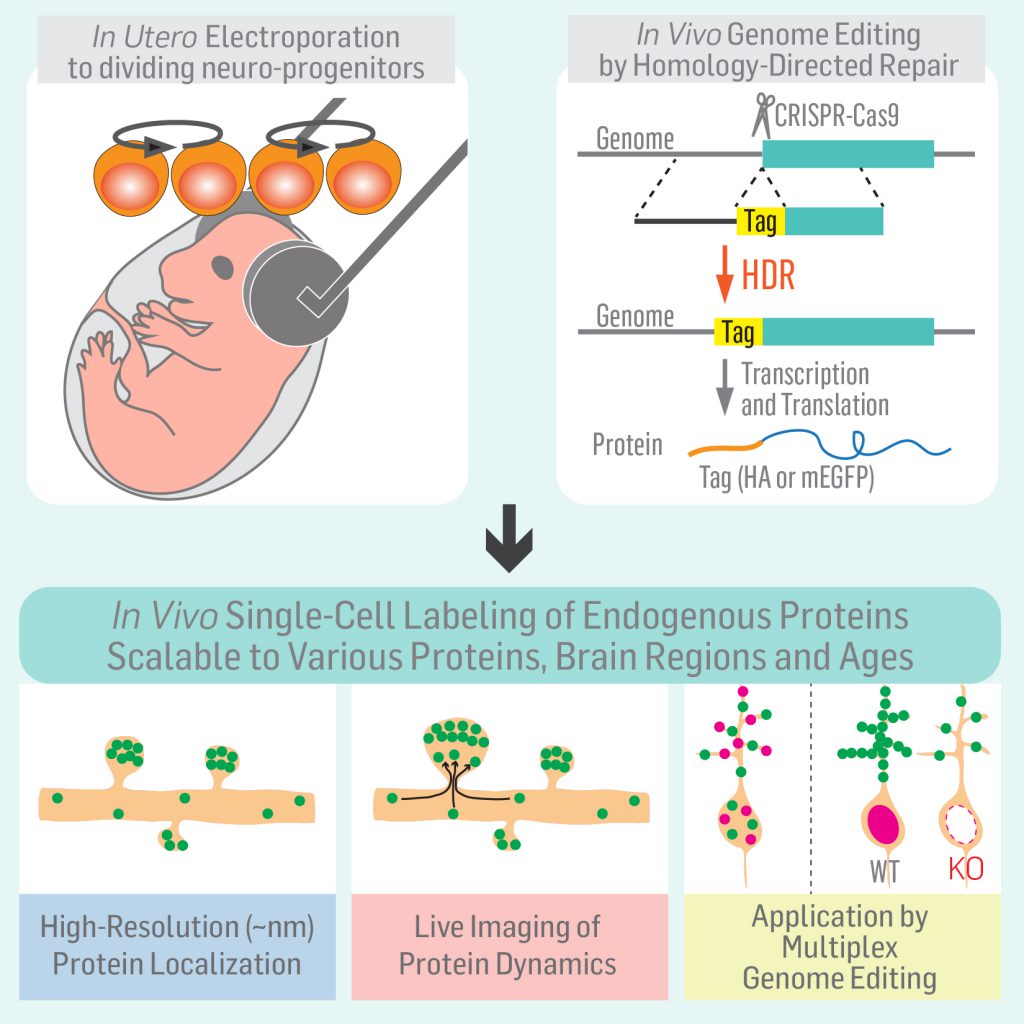 If a cell uses HDR to repair itself, scientists can include a desired gene in the CRISPR system that will be inserted into the DNA to replace the damaged gene. Many researchers believe that once a cell stops dividing, it usually uses NHEJ, instead of HDR, to repair any broken DNA.

Despite the impressive power of the CRISPR system, there has been little success in manipulating DNA in brain cells, because by the time the brain has formed, its cells are no longer dividing. While scientists can use CRISPR relatively easily to knock out certain genes in the brain, the lack of cell division has made it very difficult for them to knock in desired genes, through HDR, with reliable precision.

Yasuda and his team developed a method, which they call SLENDR (single-cell labeling of endogenous proteins by CRISPRCas9-mediated homology-directed repair), that can be used to precisely modify neuronal DNA in living samples. In experimental models, the team used in utero electroporation, a technique that allowed them to insert the CRISPR/Cas9 system into prenatal brain cells that are still developing and dividing. Thus, the broken DNA are still being repaired via HDR, allowing the researchers to add a gene that made a protein of interest visible under the microscope. They were even able to reliably label two different proteins with distinct colors at the same time in the same cell. The researchers used a variety of imaging methods as well as DNA sequencing to confirm that the SLENDR method had truly and precisely knocked in the genes.

While testing the new technique, the team observed a previously undescribed behavior of the α isoform of protein kinase C. Early in development, about 7 days after birth, it was found clustered at the membrane of the cell, suggesting it was highly active, whereas a month after birth, it was spread diffusely throughout the cell, suggesting that it did not remain highly active later in development.

“I believe that SLENDR will be a standard tool for molecular and cellular neurobiology,” said Yasuda. “SLENDR provides a valuable means to determine subcellular localization of proteins, and will help researchers to determine the function of the proteins.”