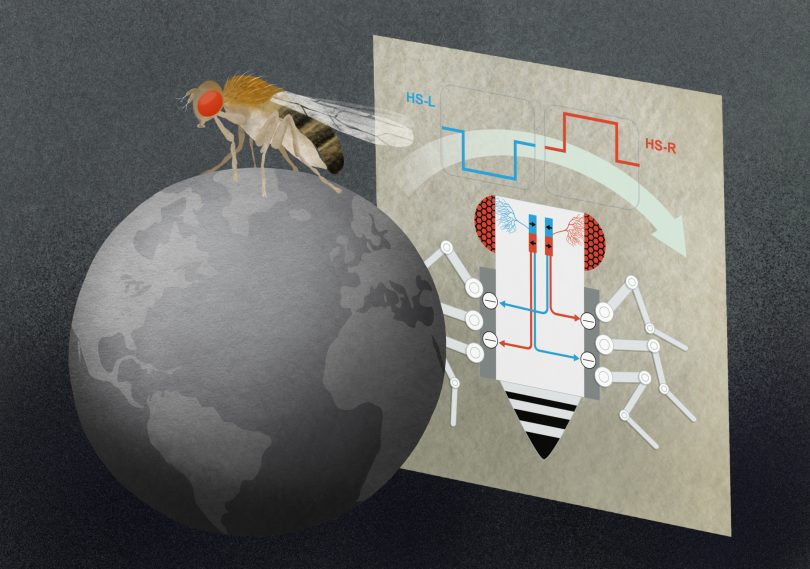 HS cells in the fly brain respond to large-area horizontal movements of the environment. The cells use these information to slow down the legs either on the right or the left side of the body to initiate a rotational movement. © MPI of Neurobiology / Kuhl

We are not easily knocked off our feet. A fruit fly, on the other hand, may be pushed off course by a gust of wind. However, three large nerve cells in each half of the fly’s brain are sufficient to bring the fly back on track with the aid of visual signals.

If we move forward, the environment projected on our eyes moves in the opposite direction. If we turn around, the image of the environment shifts in one eye from back to front, while in the other, it moves from front to back. This “optical flow” is used by vertebrates and insects alike to adjust their movements. To enable this to function properly, nerve cells specialized in certain movement directions must be involved.

In in each half of a flies’ brain, three large, so-called HS cells respond to wide-field horizontal movements. If this is a movement in the favorite direction of the cells, their membrane potential rises – they depolarize, which usually triggers an increase in the release of neurotransmitters. Conversely, the cells respond to a movement in the opposite direction with a reduction in membrane potential – they hyperpolarize. Alex Mauss and Christian Busch from the Max Planck Institute of Neurobiology now demonstrate that indeed both cell reactions influence the way the flies walk.

The two scientists had fruit flies walk on a air-supported ball, surrounded by monitors. From the movement of the ball, the researchers were able to reach conclusions about the intended movement of the fly, whether it wanted to walk straight ahead or turn around. During this procedure, stripes moved horizontally on the monitor – sometimes in front of just one eye, sometimes for both eyes, sometimes in the same direction, sometimes in the opposite one.

In order to manipulate the activity of the HS cells, the scientists equipped them with light-sensitive ion channels. One group of flies had ion channels in the membrane of their HS cells, which depolarize when the cells are exposed to light, while another group had ones that hyperpolarize the cells when exposed to light. Surprisingly, both the de- and hyperpolarizing activity changes were able to initiate a rotation. “This is the first time that anyone has been able to show the influence of hyperpolarization on a movement”, says Mauss.

However, in order to turn voluntarily, the flies presumably briefly suspend their HS cell system. When walking straight ahead, countermeasures appear to be available, since otherwise, the animals would continue to be slowed down by the HS cells. “We assume that the flies compare the HS cell signals against an internal expectation when walking straight ahead and neutralize their braking effect as a result,” Alex Mauss explains. “Perhaps we will be able to demonstrate this in one of our next tests.”