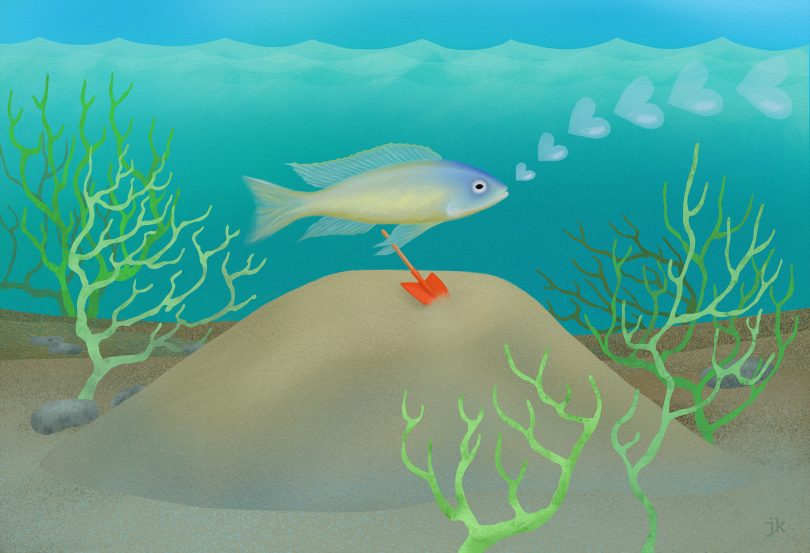 A collaboration between Georgia Tech and the Max Planck Institute of Neurobiology (MPIN) has received a grant of $750,000 over three years from the Human Frontier Science Program (HFSP). The award will allow research on the molecular and genetic encoding of complex behaviors.

The team is led by Georgia Tech’s J. Todd Streelman and MPIN’s Herwig Baier. Streelman is a professor in, and the chair of, the Georgia Tech School of Biological Sciences. Baier is professor and director at the Max Planck Institute of Neurobiology.

To find answers, Streelman and Baier will develop a model system to chart the complex path from genome to brain to behavior in cichlid fish from Lake Malawi.

Male cichlid fish build bowers to attract females for mating. The bowers are either pits, which are depressions in the sand, or castles, which look like volcanoes. Each type corresponds to a specific behavior encoded in a fish strain.

When the two strains mate, their male offspring display a remarkable behavior: First they construct a pit then a castle. This behavior indicates that a single brain containing two genomes can produce each behavior in succession.

Moreover, gene expression in the brain is biased toward the pit variant of the genome – or pit allele — when the fish are digging pits and toward the castle allele when they are building castles. “This phenomenon offers the chance to identify both the genome regulatory logic and the neural circuitry underlying complex behavior in one sweep,” Baier says.

Streelman’s group will use single-cell RNA sequencing to pinpoint the cell populations that mediate context-dependent, allele-specific expression in male bower builders. Baier’s team will use genome editing and optogenetic tools to manipulate particular neurons in the brains of behaving bower builders.

“Our collaborative work will thus identify the neurons in which behavior-specific alleles are expressed and then, ideally, match those neurons to the corresponding behavioral output,” Baier says.

“Achieving our goals will demonstrate how the genome is activated in particular cell types to produce context-dependent natural social behaviors”, Streelman says.

The award is one of only 25 made from a total of 654 letters of intent HFSP received from around the world. HFSP provides funding for frontier research in the life sciences. The highly competitive program is implemented by the International Human Frontier Science Program Organization, based in Strasbourg, France.