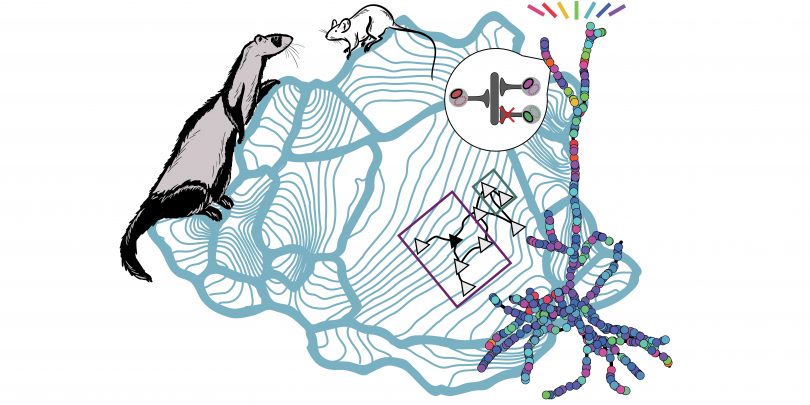 Differences in cortex size lead to distinct patterns of synaptic organization in mice and ferrets. This organization depends on the size of the retina and the cortex, which constrain how neighboring cortical neurons process naturally occurring visual stimuli like oriented edges. © Max Planck Institute for Brain Research / E. Morozova.

Recent leaps in technology have enabled neuroscientists to look deep inside the brain and record the communication of individual neurons. Neurons contact thousands of other neurons via synapses, highly specialized connections between a neuron’s axon (information-sending compartment) and another neuron’s dendrite (information-receiving compartment). Synapses located on the same stretch of dendrite are often co-active, a phenomenon described as synaptic clustering. The mechanistic origins of synaptic clustering, however, have yet remained elusive. Using computational modeling, scientists at the Max Planck Institute for Brain Research in Frankfurt now gain important insights on the synaptic organization in different animal species based on a simple parameter: the size of the cortex.

“Recent experimental data has revealed an astonishing amount of synaptic organization across different animal species from rodents to primates. Synaptic clustering has been predicted to have powerful computational properties in theoretical studies dating back to the early 90s, but their existence has only recently been confirmed experimentally. This opens up many new exciting questions”, says Max Planck Research Group leader, Dr. Julijana Gjorgjieva who led the new study published in Nature Communications.

How do synapses organize themselves? Where do species-specific differences in synapse organization originate from?

Gjorgjieva and her graduate student, Jan Kirchner, built a computational model of a dendrite in the developing brain with synapses and included some of the key signaling molecules that are known to be involved in synapse organization. “One striking difference between mouse and ferret is the size of their retina and visual cortex, with each being about two vs. five times smaller in the mouse. This has global implications on the synaptic organization in the visual cortex of these animals”, explains Kirchner.
In ferret, the scientists find that nearby synapses on cortical dendrites are coactive when the animal is presented with a visual stimulus of the same orientation in space, e.g. a vertically moving bar. In contrast to the ferret, nearby synapses on cortical dendrites in the mouse visual cortex do not necessarily share a preference for the same orientation. Instead, in mice, neighboring synapses exhibit correlated activity in response to stimuli from neighboring regions in visual space.

“In addition to this local organization of synaptic inputs, our model can also predict how synapses organize on the dendritic tree of entire neurons”, Gjorgjieva notes. “Our new findings synthesize several previously seemingly unrelated or even contradictory experimental results into a coherent framework. Thus, our framework can explain how circuits wire up with subcellular precision during early development. This has a number of implications on the computational properties of cortical neurons and networks in adulthood.”