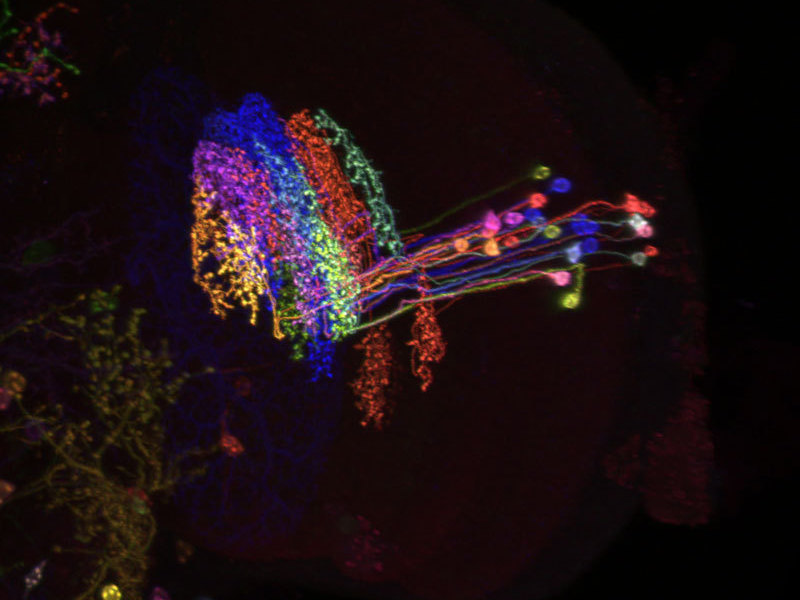 The brain processes the different directions of motion locally in separate layers. A new cell type (shown in colour) breaks this structure and prevents inappropriate activation of downstream wide-field neurons by mutual inhibition of the layers. © A. Nern, Janelia Research Campus

Motion despite immobility. The illusion of self-motion is created, for example, in an IMAX cinema with the help of large-format movies. This is possible, because the brain calculates self-motion from the visual surround moving past the eyes. Deciphering how this is accomplished is the aim of Alexander Borst and his team at the Max Planck Institute of Neurobiology in Martinsried. Together with colleagues from the Janelia Research Campus in Virginia (USA), the researchers have now discovered a new neuron type in the brain of fruit flies. Detailed analysis has shown that these cells form the basis of a phenomenon known as motion opponency, meaning that – in humans and other species – specific nerve cells are activated by motion in one direction and inhibited by motion in the opposite direction. By studying the newly discovered cells, the researchers have been able to investigate this phenomenon in detail and elucidate its function for the first time.

Motion is a change in position over time. That seems simple enough, but the detection of motion is an impossible task for individual light-sensitive cells in the retina, as they only “see” a small part of the overall image. If the image changes, a single cell cannot tell whether something has moved or simply disappeared. And if movement has occurred, where to? To determine motion and its direction, the brain therefore must compare the image information of multiple light-sensitive cells − and it must do so with a certain time lag between neighbouring cells.

Alexander Borst and his team at the Max Planck Institute of Neurobiology are deciphering exactly what happens in the brain. The researchers are teasing the system apart, cell by cell, analyzing the structure, connections and functions of the individual parts. This is, of course, not possible in the human brain. Instead, they are using the fruit fly as a model organism to investigate motion vision. “Despite their obvious differences, flies and humans process optical information in a similar way,” says Alexander Borst.

The scientists were able to show, for example, that visual perception in flies – as in humans − is initially split into two separate processing pathways: one pathway for bright edges and one for dark edges. Within each of these pathways, the information is then sorted according to direction, each direction being processed separately. The researchers not only revealed the existence of the two pathways in the fly brain, but also identified which cells are activated and how they are connected. “Discovering the different direction pathways in the brain was a great finding,” Alexander Borst recalls. However, if directions of motion are processed separately, why does the phenomenon known as motion opponency exist? In flies, humans and many other animals, large wide-field neurons located deeper in the brain are excited by motion in their preferred direction, whereas these same cells are inhibited by motion in the opposite direction. Given that directional information is processed separately, there should be no need for inhibition by motion in the opposite direction. “This little inconsistency kept us awake at night,” says Borst. Sometimes researchers want to get to the bottom of it.

Border crossers with a crucial function

The scientists applied all their skill to clarify this “small detail”. Ultimately, they discovered a crucial missing circuit component called LPi cells. This hitherto unknown type of neuron breaks the strict order of separate directional pathways. The cells send inhibitory signals from their assigned pathway to the neighbouring pathway, which is responsible for detecting motion in the opposite direction. The results show that LPi cells in the fly brain are directly responsible for inhibiting wide-field cells by motion opposite to their preferred direction. The newly discovered cells therefore form the cellular basis of motion opponency. For the first time, it was now possible to elucidate the functional significance of this phenomenon.

The subsequent investigations revealed that LPi cells prevent the downstream wide-field cells from being stimulated by non-specific signals within their field of vision. “Flies are masters of motion vision. But without LPi cells, they would be unable to distinguish between different motion patterns due to inappropriate activation,” says Alex Mauss, summarizing the findings of his recently published study. When the scientists blocked the function of LPi cells, the wide-field cells were stimulated by motion patterns produced during forward flight as strongly as by motion patterns associated with rotational or lift movements. The researchers therefore succeeded in elucidating the circuit diagram of motion vision in this part of the fly brain and were also able to show how the system uses a simple mechanism to filter out unspecific signals.