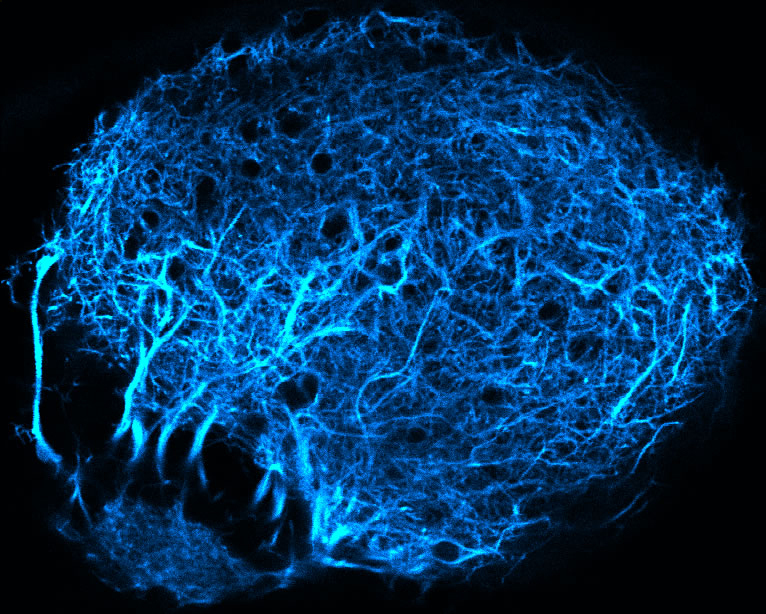 Thezebrafish tectum recognizes an approaching object as a threat. This brain area is innervated by axons from the eye (stained blue). © Max Planck Institute of Neurobiology / Temizer

Humans and animals instinctively evade rapidly approaching objects. By doing so, they avoid collisions or escape attacking predators. For this to happen, the brain must calculate the direction and speed of a stimulus in the visual system and initiate an appropriate evasive reaction. How the brain achieves this is largely unclear. Scientists from the Max Planck Institute of Neurobiology in Martinsried have now shown in zebrafish larvae what is interpreted as an approaching foe and which area of the brain recognizes an object as a threat and initiates a flight reaction.

Duck! In most cases, this warning is not necessary when we see an object approaching on collision course. Whether in a fly, fish, mouse or human, such situations generally trigger a stereotypical evasive reaction. In this way, potential predators or injury can be avoided. “Because this behaviour is so similar across the entire animal kingdom, there is probably a hardwired programme for it in the brain,” says Incinur Temizer, summarizing the essence of her doctoral dissertation. In Herwig Baier’s Department at the Max Planck Institute of Neurobiology, she is studying, based on this example, how the brain converts sensory impressions into behavioural responses.

Incinur Temizer and her colleague Julia Semmelhack have now shown that zebrafish larvae measuring just a few millimetres in length flee from a two-dimensional representation of an object moving towards them. To pinpoint the location of the responsible circuit in the brain, the scientists first determined what exactly triggers the flight reflex. In a series of experiments, they showed the fish a range of objects that differed in size, brightness and speed. The results showed that the flight reflex is most reliably triggered by a dark disc that “looms”, meaning that it gradually increases in size.

The researchers then used optical methods to measure brain activity in response to this “key stimulus”. This is possible, as the tiny fish larvae are completely transparent. Thanks to a genetic modification, the brain areas that are active fluoresce under a microscope. In this way, the scientists were gradually able to narrow down the precise area of the brain that recognizes an approaching enemy and triggers a flight reflex.

The image of a looming object on the retina activates highly specific ganglion cells, which then relay the information to an area in the fish’s brain known as the tectum. The tectum assigns objects to a location in visual space and coordinates movement towards or away from such objects. “We were able to show, for the first time, that neurons in the retina recognize an approaching object and trigger an evasive reaction through links to the tectum,” says Julia Semmelhack, summarizing the findings of the recently published study. That the tectum is really critical became clear when the researchers cut off the input of these retinal ganglion cells: such fish larvae were not entirely blind but no longer responded to approaching objects.