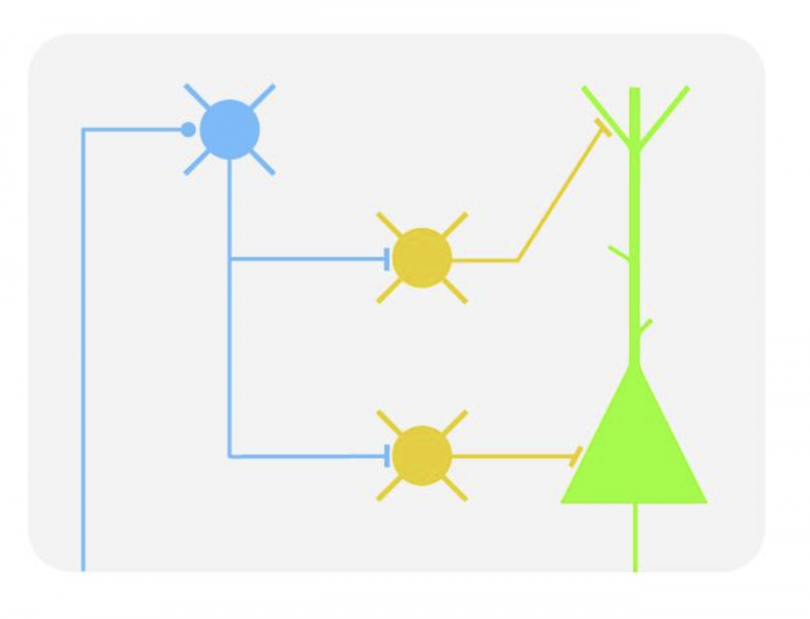 Disinhibtion can regulate plasticity in a neuronal circuit

The brain has an enormous capacity to store information, and to retrieve it again in a highly efficient way that is to date unmatched by any computer. How the brain achieves this is still largely a mystery, although the neuronal mechanisms of learning have been investigated intensely for many decades. What we understand quite well by now is which brain areas are required for a given type of learning. For instance, we know that the hippocampus contains a map of space, and that spatial learning critically depends on the function of this brain area. In parallel, we have gained a detailed understanding of how the communication between single neurons in the brain is changed during learning in a process called synaptic plasticity. What has for a long time been much more difficult to investigate is how learning occurs at the organization level between single neurons and entire brain areas, at the level of neuronal networks. As Johannes Letzkus from the Max Planck Institute for Brain Research in Frankfurt now reports together with colleagues from Basel in a recent review paper in Neuron, progress over the last five years has provided a first glimpse of these mechanisms. Strikingly, different types of learning in different brain areas have been found to harness the same simple, conserved learning mechanism called disinhibition.

The capacity to learn from experience is an essential brain function, which drastically increases an animal’s fitness by enabling rapid, adaptive changes of behavior, and collectively also defines the human identity as the sum of an individual’s experience. Learning to form mental connections or associations between external stimuli is a simple and fundamental form of memory formation, which has been under intense investigation from various angles for many decades. This research revealed that learning depends on selective changes in the strength of information transfer between single neurons, a process called synaptic plasticity. For instance, many experimental manipulations that interfere with synaptic plasticity also impede learning at the behavioral level. It is thus thought that learning changes the behavioral reaction to an external stimulus by using synaptic plasticity to alter the way this stimulus is processed in neuronal networks.

But how is synaptic plasticity induced during learning? It is known that periods of increased activity can lead to a strengthening of connections between neurons. However, how activity may be enhanced during learning has until recently remained elusive. An important hint here is that under baseline conditions, when no learning occurs, neuronal networks function at a very tightly controlled balance of synaptic excitation (which promotes activity) and synaptic inhibition (which reduces activity). This situation is analogous to depressing both the accelerator and the break pedal of a car simultaneously, and one can easily imagine that it is energetically quite costly. However, this arrangement allows the brain to independently modulate both forces, and that is exactly what happens during learning, when the accelerator is still depressed but the break pedal is removed for a brief period of time. In neuronal terms, this reduction in synaptic inhibition called disinhibition has recently emerged as a simple mechanism that enables synaptic plasticity and learning.

Work by many laboratories world-wide including the Letzkus lab has shown that disinhibition occurs in several learning paradigms, ranging from emotional learning and forms of plasticity triggered by changing the sensory input an animal gets to learning how to navigate in a new environment, suggesting that disinhibition is a widely-used, conserved learning mechanism. Depending on the type of learning the animal displays, disinhibition can occur at time scales ranging from less than a second to several days, which indicates that this mechanism is flexibly used in the brain. Finally, when the researchers blocked the disinhibition, learning at the behavioral level was also impaired, demonstrating that disinhibition is causally linked and required for memory formation. However, disinhibition alone can very likely not induce learning. Instead it is probably one of a few critical mechanisms that need to play together to enable this fascinating and important brain function.