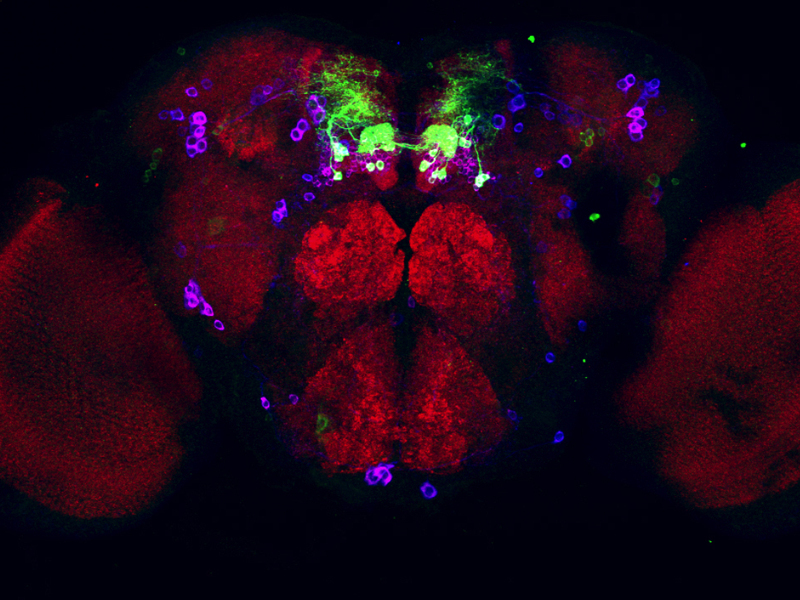 Nerve cells that use dopamine as a neurotransmitter (green) enable hungry flies to ignore danger signs and modulate their innate behaviour. © MPI of Neurobiology/ Friedrich

For most of us, a freshly brewed cup of coffee smells wonderful. However, individual components that make up the fragrance of coffee can be extremely repulsive in isolation or in a different combination. The brain therefore relativizes and evaluates the individual components of a fragrance. Only then is an informed decision possible as to whether an odour and its source are “good” or “bad”. Scientists from the Max Planck Institute of Neurobiology in Martinsried have discovered how conflicting smells are processed in the mushroom body of the brain of the fruit fly. The results assign a new function to this brain region and show that sensory stimuli are evaluated in a situation-dependent context. In this way the insects are able to make an appropriate decision on the spur of the moment.

Most sensory impressions are complex. For example, a fragrant substance usually appears in combination with many other odours – like the smell of the aforementioned cup of coffee, which consists of over 800 individual odours, including some unpleasant ones. For the fruit fly Drosophila, the smell of carbon dioxide (CO2) is repellent. Among other things, the gas is released by stressed flies to warn other members of the species. When the insects smell CO2 an innate flight response is triggered. However, CO2 is also produced by overripe fruit – a coveted source of food for many insects. Foraging flies must therefore be able to ignore their innate aversion to CO2 in instances where the gas is present in combination with food odours. It is still poorly understood how the brain compares individual olfactory sensations and classifies them according to the situation at hand in order to reach a sensible decision (here: food or danger).

“The opposing significance of CO2 for fruit flies is an ideal starting point to explore how the brain correctly evaluates individual sensory impressions depending on the situation,” says Ilona Grunwald Kadow. Together with her team at the Max Planck Institute of Neurobiology, she studies how the brain processes odours and makes decisions based on the results. The scientists have now been able to show that complex or opposing sensory information is processed in the mushroom body. Until now, this brain area was thought to be a centre for learning and memory storage. The new results show that the mushroom body has an additional function: it evaluates sensory impressions independently of learned content and memory to allow instantaneous decisions.

The scientists were able to show that CO2 activates neurons in the neural network that includes the mushroom body. Those neurons, in turn, trigger the flies’ flight behaviour. However, if CO2 occurs along with food odours, the food odour stimulates neurons within the mushroom body network that release the neurotransmitter dopamine. Dopamine occurs in many species, including humans, in connection with positive values. When food smells are present along with CO2, these dopaminergic neurons in fruit flies transmit this information to the mushroom body, where they suppress the innate CO2 response by inhibiting “avoidance neurons”.

“Interestingly, the experience that CO2 frequently occurs together with food odours does not cause the insects to lose their aversion to CO2 forever,” says Grunwald Kadow. When the information about the simultaneous occurrence of CO2 and food odours is transmitted to the “learning centre” in the mushroom body, an immediate change of behaviour occurs, but not a permanent change with regard to the negative evaluation of CO2. This could apply to other sensory impressions as well, such as vision. The researchers speculate that the absence of a permanent change in behaviour could be vital in many situations. The smell of predators, for example, triggers an instinctive fear in humans. We do not lose this fear, even after experiencing caged predators and their smell at a zoo. The human brain therefore also appears to compare and draw different conclusions depending on the circumstances.