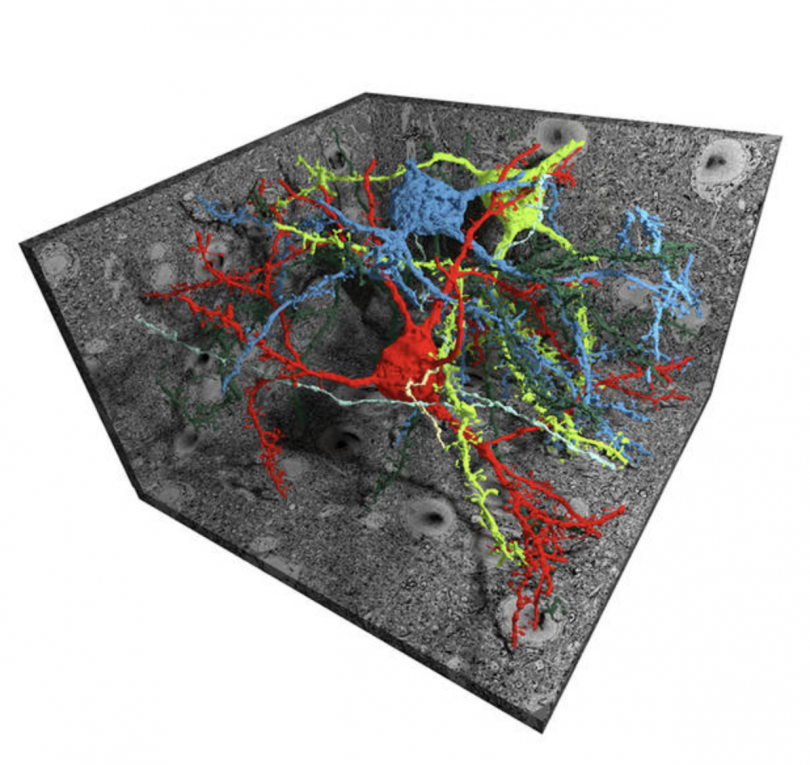 Unraveling the connectivity maps between nerve cells in brains is a huge scientific endeavor – called connectomics. The main limitation to mapping large parts of the brain is the analysis of the data obtained with electron microscopes. Berning and colleagues from the Department of Connectomics at the Frankfurt-based Max Planck Institute for Brain Research developed a novel toolset, called SegEM, which speeds up connectome analysis by more than 10-fold. They report their break-through as cover story in the current issue of Neuron.

Connectomics is a relatively new research field where researchers aim to reconstruct the neuronal connectivity in parts of the brain from measured datasets. Besides the anatomical structure of neurons, this includes a reconstruction of the actual connections between the nerve cells via their synapses. As a single neuron communicates with up to thousands of other neurons and the cells are extremely densely packed, this is a difficult and extremely time-consuming endeavor. In comparison to the measurements, which already take thousands of hours, the analysis and reconstruction phase takes more than three orders of magnitude longer. In order to make this manageable in a lifetime, two main reduction strategies are followed simultaneously. This first one is to increase the manpower – and the second strategy is to develop new algorithms to reconstruct the brain tissue data in a more automated way.

Researchers at the Department of Connectomics are already working on increasing the number of participants by developing a platform where also non-qualified personnel (e.g. students) can assist in the analysis of the connections between the neurons. The research group already recruited large populations of students to help determine the connectome of a part of the mouse retina and is currently developing the game Brainflight to have as many as people as possible participating in a similar project for the cerebral cortex.

The most recent publication in Neuron however deals with the other strategy to reduce the analysis time. Due to the complex structure and the large number of connections in a piece of cerebral cortex, a manual analysis would take up to 500.000 work hours and an investment of millions of Euros. Manuel Berning, Kevin Boergens and Moritz Helmstaedter have now discovered a way to also automatically speed up the image classification step. Berning: “By using machine learning algorithms, we were able to develop a way to automatically classify brain tissue containing all the synapses. By using these SegEM tools, we reduce the time for analysis by at least a factor of ten, bringing the analysis step closer to data generation.”. The researchers first trained their system with existing data sets from retina and cortex before performing an automated test of new data. Helmstaedter: “We were amazed that the new algorithm actually works extremely well for retinal and cortical data. This is real breakthrough, and an important step towards making connectome analysis a ready-to-use technique in neuroscience labs around the world.”.