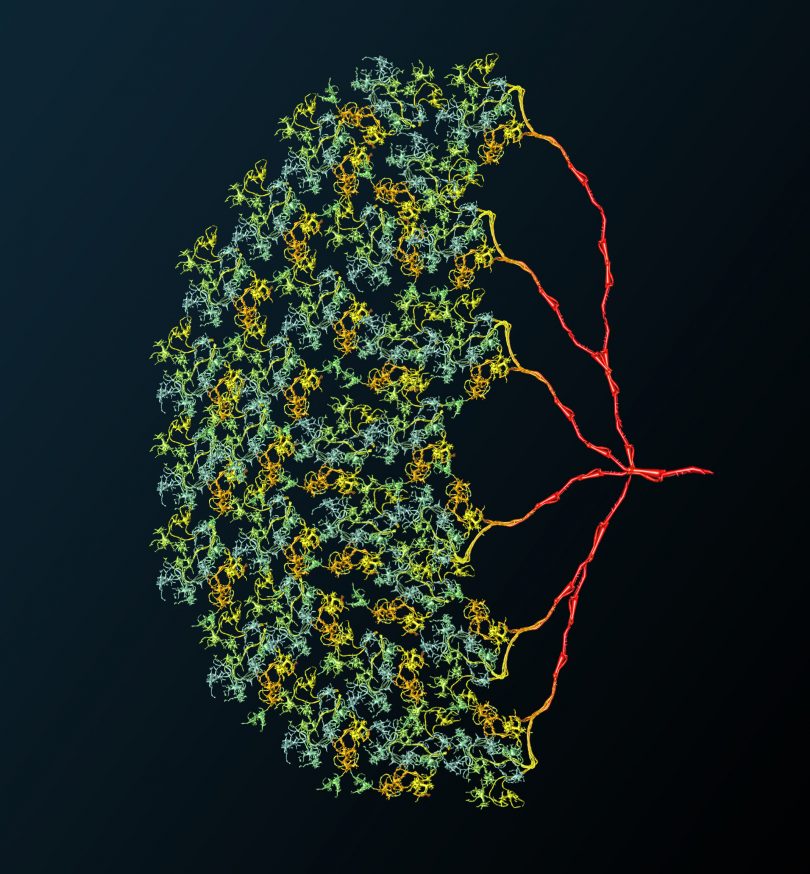 CT1 is different. In general, a nerve cell receives input from a number of presynaptic cells, processes the signals, and passes its output to downstream cells. In the cell CT1, however, each of the approximately 1400 cell areas works like a separate neuron. This allows CT1 to access information from all facets of the fly’s complex eye and to contribute locally to the calculation of motion direction. Using a computer model of the cell, Alexander Borst and Matthias Meier from the Max Planck Institute of Neurobiology show that CT1 is reaching biophysical limits.

“That’s an amazing cell!” This was the first impression of Alexander Borst, as Matthias Meier showed him the results. Together, the two neurobiologists have demonstrated what is also suspected for amacrine cells in the mammalian retina: It is possible that numerous isolated microcircuits exist in a single nerve cell.

Borst and Meier investigate the visual system of fruit flies, whose complex eyes each consist of about 700 facets. CT1 contacts each of the cell columns that connect to these facets in the brain. In addition, the synapses of CT1 reach into two different brain regions, responsible for the processing of light or dark edges. Thus, CT1 connects to about 1400 areas in the fly brain. This, however, should corrupt the whole system. Each cell column processes changes in light perceived by “their” facet. If the signals of the columns were mixed, the entire image information for downstream cells would be lost.

As flies see very well, a loss of image information does not seem to be an issue. The two neurobiologists could show that each contact area of CT1 is an electrically isolated, independent functional unit. Each of these units receives input from its associated column and returns its output to the same column. Calcium measurements and computer modelling show that essentially, there is no cross-talk between neighboring units or with the cell body.

For the cell units to be electrically isolated from each other, their connections should be thin and long, which increases the electrical resistance. CT1 achieves this with connections of merely 100 nanometers in diameter. In addition, the “connection cables” often form loops. In this way, the connections between neighboring units are about ten times longer than needed to bridge the distance. “It wouldn’t be possible for the connections to get much thinner or longer in the fly brain,” says Borst.

Why CT1 is so different from most other cells is still a mystery. “It saves cell bodies, but that is certainly not the only reason”, muses Matthias Meier. “If that was the case, such huge amacrine cells wouldn’t be so rare.” So far, only very few cells are known with such a structure. Amongst them, CT1 is an extreme example, of which only two cells exist in a fly brain, one per hemisphere.

The scientists are also not yet sure about the exact functions of CT1. The output of the CT1 subunits goes to T4 or T5 cells, depending on their location. These calculate the direction of images moving in front of the fly’s eye. Interestingly, CT1 cells specifically target the motion-sensitive T4 and T5 cells only on one-half of their dendrites. How CT1 thereby affects motion vision is one of the next questions the Max Planck neurobiologists want to investigate.