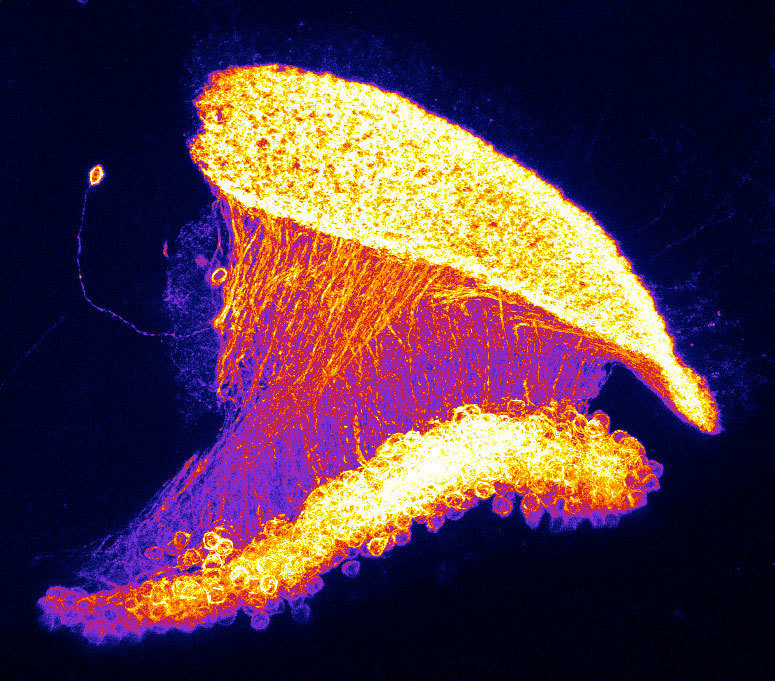 Our visual environment is incredibly complex. The smallest of spaces contain innumerable colours, structures and contrasts. Despite this we are able to identify objects and movements with high accuracy. Even the fruit fly, which only has a fraction of our neurons, can manage these distinctions. Researchers from the Max Planck Institute of Neurobiology in Martinsried have now found evidence that the visual system of the fruit fly has adapted optimally to the features of the environment over millions of years. The unequal distribution of bright and dark regions in nature is reflected in similarly asymmetric processing by the fly brain.

Without us being aware of it, our visual system tackles incredibly difficult tasks every second. For example, to be able to reach for a pen, our brain must distinguish its form and texture quickly and accurately from dozens of other – often very similar – objects in the environment. This process works under a very wide variety of light conditions and against almost any kind of background. To facilitate the processing of such visual information, the visual system incorporates expectations of typical features of the environment into its calculations. Alexander Borst and his team at the Max Planck Institute of Neurobiology have investigated how these expectations factor into neuronal calculations in the fruit fly Drosophila melanogaster.

Course correction in a virtual environment

In their experiments, the researchers made use of an innate behaviour of flies. The animals steady their course with the help of what is known as the optomotor reaction. For example, if a fly is blown off course to the left by a gust of wind, the entire world rotates to the right from its perspective. To get back on course, flies reliably rotate in the same direction as the perceived image, in this instance to the right. To study the principles behind this course correction, the researchers built a virtual environment for the animals. Three computer monitors led the fly to believe that it was navigating through different natural environments while sensors followed its movements on an air-suspended polyurethane ball. 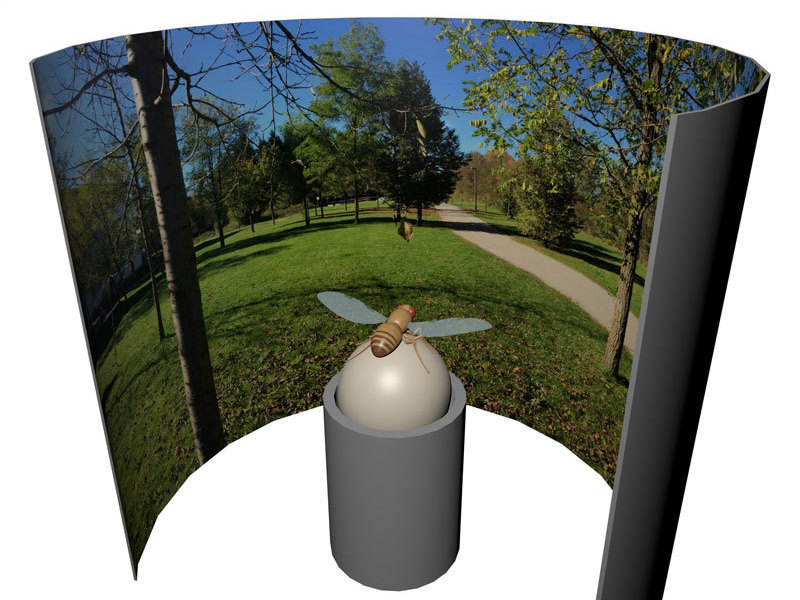 Tests carried out in a virtual environment show how expected features in a complex environment are taken into account in neuronal calculations.
© MPI of Neurobiology / Prech & Leonhardt

“I crawled through the woods around the institute for days with my smart phone, to record the panorama images we used in these experiments,“ reports Aljoscha Leonhardt, one of the study’s first authors. The researchers occasionally simulated a virtual gust of wind by briefly rotating the environment on the screens to the right or left. As in nature, Drosophila skilfully adjusted to this optical drift: within a fraction of a second, the insect was moving straight again through the virtual world.

The researchers then used a genetic trick to suppress the activity of the neurons that calculate the direction of movement in the fly brain and ultimately trigger the fly’s rotation. In a similar way to vertebrates, this computation is performed in two parallel channels in the fly’s optical system: once for increases in brightness (ON channel) and once for reductions in brightness (OFF channel). The former is carried out in T4 cells and the latter in T5 cells. When both types of neurons were switched off, the animals were no longer able to see the movement of their environment and could not correct their course. However, if only one of the channels was switched off, to the astonishment of the neurobiologists, the flies continued to compensate for the virtual gusts of wind rapidly and efficiently. Hence each of the two channels appears to respond optimally to environmental changes.

However, further tests revealed that considerable differences exist between the two channels. For example, while the T4 cells of the ON channel responded very strongly to slowly moving bright edges, the T5 cells of the OFF channel were mainly active in the presence of rapid dark edges. To test whether this asymmetry represents an adaptation to nature, the researchers simulated the network on the computer. They trained virtual T4 and T5 cells to estimate the speed of moving natural images as precisely as possible.

The result showed a very similar asymmetry to that observed in the earlier physiological tests. “We assume that the functional differences between T4 and T5 cells developed as an adaptation to the different distribution of bright and dark in the natural visual environment,“ explains Georg Ammer, the second first author of the study. Incorporating expectations of the natural environmental conditions makes the visual processing more reliable and efficient. Because people and flies live in similar visual environments, it is conceivable that this insight into visual processing in the fly brain is also applicable to the human brain.