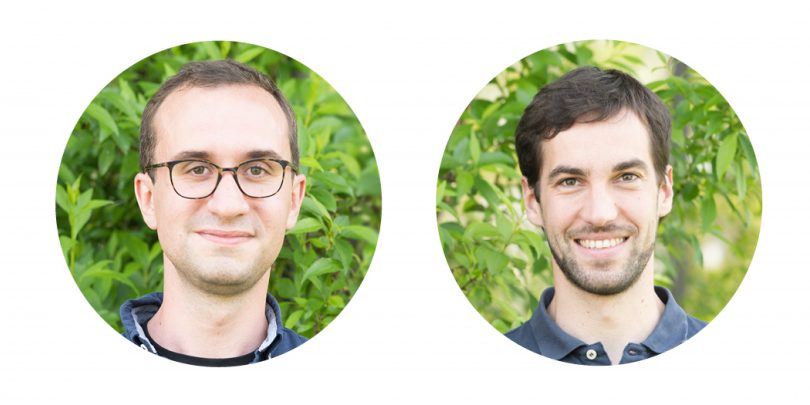 This year, two young scientists from the Max Planck Institute of Neurobiology in Martinsried will receive the Otto Hahn Medal, which includes prize money of €7500. The two young neurobiologists have contributed decisively to a better understanding of how movement information is processed in the visual system of the fruit fly Drosophila.

Why of all creatures, explore the visual system of flies?

“Flies are masters at quickly and efficiently converting visual information into suitable flight maneuvers,” explains Aljoscha. When we try to swat a fly, it realizes that something is coming. Their brain then effectively calculates from which direction the threat is coming from and what the best escape route is. That’s why it escapes so often.

Vision is therefore a process that takes place not only in the eye but also in the brain. “Our brain would be far too complex to investigate what is going on in such cases”, explains Georg. “However this is possible in flies!” The fly brain has ‘only’ around 100,000 neurons, which is considerably less than the estimated 100 billion human neurons. Aljoscha and Georg are therefore investigating the processes of vision in the brain of fruit flies.

For several years, the two have been conducting their research in the Department of Alexander Borst. During this time, Georg and Aljoscha have collaborated on various projects and celebrated joint successes such as the publication of research results. On June 26th 2019, they will also be awarded the Otto Hahn Medal for their respective research work.

Georg found out about his award when he found a letter from the Max Planck Society in his pigeon hole. “When I saw a similar letter in Aljoscha’s pigeon hole, I was, of course, doubly pleased”, he says.

Aljoscha then heard the good news from his colleague shortly afterwards. “I was in our tea kitchen enjoying a short coffee break when Georg asked me to check my mailbox. Of course, the Otto Hahn Medal didn’t even cross my mind. I just went along. A thick letter awaited me – identical to the one Georg had already opened.”

“The medals are a nice proof that teamwork pays off!” says Aljoscha, who is particularly pleased that Georg is also being honored.

Light and shadow – image processing in the fly brain

As part of his doctoral thesis, Aljoscha and his colleagues, including Georg, analyzed the extent to which the visual system of the fly has adapted to the natural conditions of the world. He wanted to find out how the circuits in the fly’s nervous system could perceive the visual world so robustly and efficiently.

Equipped with a smart phone and his research in mind, Aljoscha crawled through the forests around the Institute for days on end. The scientists used the panoramic images of the natural environment of flies taken there, to put the visual system of Drosophila to the test. They found evidence that the visual sense of movement of the fruit fly has optimally adapted to the characteristics of the environment over millions of years: The unequal ratio between light and dark areas in nature is reflected in a similarly asymmetrical processing in the fly brain.

Aljoscha focused his further research on expanding the understanding of the fly’s motion-vision system in the context of natural image processing. Among other things, he developed a computer model to understand how images of the surroundings with different speeds are processed in the brain of the fly. Because of his achievements in this field, he is being awarded the Otto Hahn Medal.

In addition to the joint experiments, Georg had another focus. He contributed significantly to clarifying the neuronal circuits in the fly brain. For this work, he is receiving the Otto Hahn Medal. Based on his research, we can now better understand how the brain calculates seen movements.

“The photoreceptors in the eye only detect changes in light and dark,” explains Georg. “If the need arises, the brain should be able to quickly and accurately calculate a movement and its direction. Otherwise, it will be no match for a predator or a fly swatter.”

As part of his doctoral thesis, Georg and his colleagues identified the cells that are the first to react direction-selectively to movement. In addition, in another study, Georg even determined which cells play a role for which speeds. According to his findings, one group of cells is responsible for directional sensitivity, especially at high speeds. Other cells, in contrast, are important for the entire speed range.
Fly research also in the future

Aljoscha and Georg both agree on how interdisciplinary, diverse, and exciting the field of fly research is. It is therefore not surprising, that both want to continue working in the field: “We take vision for granted”, explains Aljoscha. This makes him even more fascinated by how difficult it is, to technically reproduce this process. “Even the best algorithms of artificial intelligence are still a long way from catching up with our brains.” He aims to help improve computer algorithms with findings from his research.

Both are highly motivated to continue exploring the secrets of the fly brain. The Otto Hahn Medal does what it is meant to do: Reassured, young doctorate graduates such as Aljoscha and Georg can continue to pursue their research and career goals. It will be exciting to see what more they discover.